The Archbishop of Canterbury has been in the Democratic Republic of Congo (DRC) visiting areas affected by the Ebola crisis.

The World Health Organization (WHO) declared the Ebola outbreak in the DRC an international emergency in July after it surfaced in August 2018.

There have been 2,169 deaths so far, including 2,053 people who died from confirmed cases of Ebola. The other deaths are considered probable cases. Just over a thousand people sickened with the virus have recovered, according to Congolese health officials.

Archbishop Justin took an aerial view of two Ebola-effected hot zones before landing in Beni and Butembo where the virus is being contained by an army of health workers and humanitarian NGOs. Following strict WHO anti-contamination procedures, Archbishop Justin toured hospitals which have been transformed into Ebola treatment facilities. The sites are a hub of medical activity with quarantine units, screening centres, and blood-testing tents set up to combat the disease.

The archbishop sensing some nerves before take-off from fellow passengers, said: "You have nothing to worry about. MAF fly in the most difficult places in the world, landing at the most difficult runways and they do it with the highest safety standards."

Throughout the Ebola crisis, MAF has been on standby to offer emergency evacuation flights, deliver blood samples and fly those working to combat the virus.

Thousands of vaccines have been delivered by MAF planes who can transport them quickly and safely. 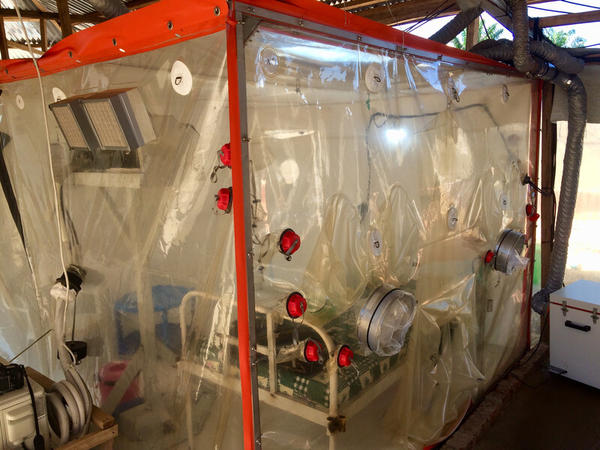 Boxes of scrubs, gloves and oxygen tanks have been flown and the WHO has been able to reach areas in the middle of nowhere.

MAF said the situation is complex, and with the threat of violence now increasing in the DRC, it is seen as a safe and trusted way to travel and transport vital equipment.

MAF Pilot Nick Frey said he was honoured to fly the Archbishop and his team to see first-hand how medical assistance is being sped to the heart of the Ebola crisis.

"It's not every day that the Archbishop of Canterbury is your co-pilot," he said.

"He is a very kind and energetic man of God, and it was a real honour to fly him to see the lifesaving work taking place in Beni and Butembo.

"The medical teams are doing an amazing job, and it's wonderful that MAF can play our part by flying key people and equipment to help fight this terrible disease."