Mr Corbryn has called for Somer and Areeb Umeed Bakhsh, who attend Possilpark Parish Church, to be allowed to stay in Glasgow with their family.

"Somer and Areeb are wonderful boys, have made great achievements in school and have wonderful parents."

On Wednesday Mr Corbyn and Scottish Labour Party leader Richard Leonard spent around an hour with the boys and their parents, listening to their story, and those of many other asylum seekers supported by the Church of Scotland.

Almost 83,000 people have signed an online petition calling on the Home Office  not to deport the 15-year-old ad 13-year-old.

They fear they will be killed by Islamic extremists if they are forced to return to Pakistan.

Somer and Areeb have lived in Glasgow with their parents since their family fled the Muslim country in 2012 after their father was subjected to death threats due to his Christian faith.

However, according to the Church of Scotland, the UK Government has repeatedly rejected the family's plea for asylum, largely because officials do not believe they would be at risk.

"I urge the Home Secretary to stop the hostile environment and recognise the human value of those who have decided to make their homes in this country because of the oppression they face back home," Mr Corbyn added.

Maqsood Bakhsh, the boys' father, said Mr Corbyn's visit has given him some hope.

Rev Linda Pollock, minister of Possilpark Parish Church, who is leading the campaign to stop the family being deported said: "It is a bit of a relief for the family that someone in a position of influence is taking an interest and sees them as human beings, not just a statistic and a number.

"We will see how it all pans out and we hope for the best." 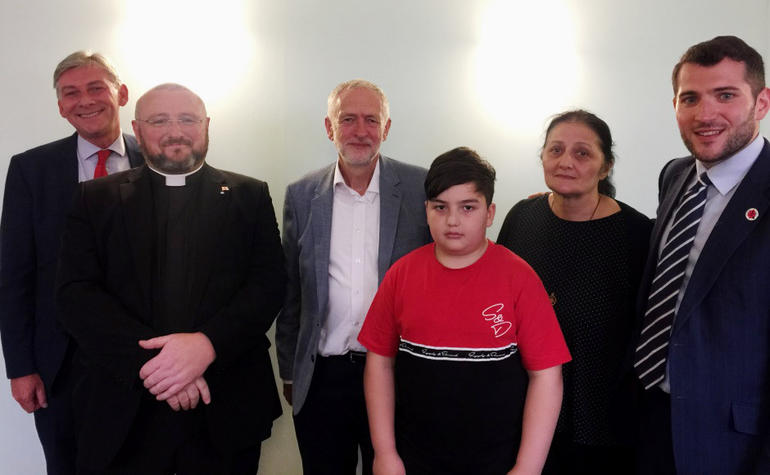 The pair, who are being supported by Rev Brian Casey of Springburn Parish Church in Glasgow, have been given permission to stay in the UK for 30 months.