The Australian star is hoping to raise three million dollars, having already paid $100,000 of his own money on the internal battle with Rugby Australia.

At the time of writing, after just two days, Folau has already raised around $500,000.

Coinciding with the fundraising campaign, Folau has also given his first interview since he was sacked.

He told Sydney's 2GB that he stood by his Instagram post which said that 'hell awaits' sinners including adulterers and homosexuals.

"My faith is what defines me as a person, it's who I am and it's why I wanted to stand up and fight [the decision].

"My identity is found in what's written in what I call the word of God." 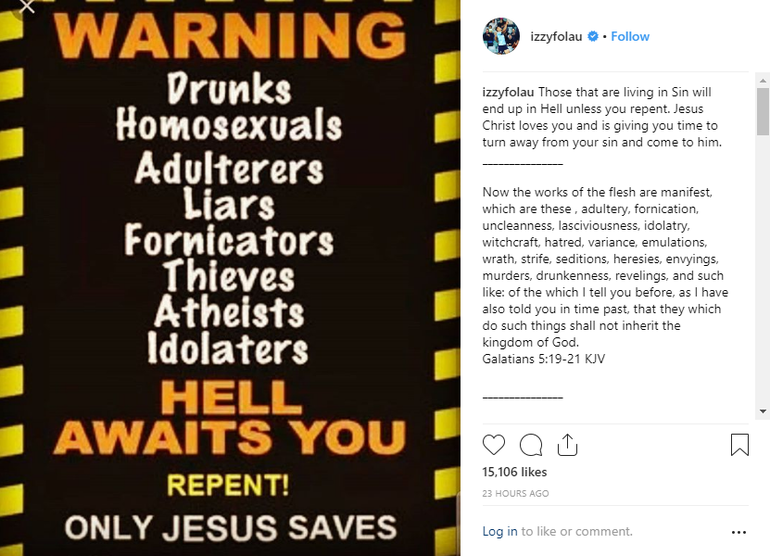 "Whether or not that was what they really meant, I don't take anything personally and I have no harsh feelings towards them," he said.

"If I do carry any hate or any judgmental feelings towards them then I'm going against the very thing I believe in."

The debate over whether Folau was right to post the message online has split opinion across Australia.

Churches have fallen on both sides of the divide.

One Anglican priest says he's received a death threat after putting up a sign outside his church which directly addressed the LGBT community saying "Folau is wrong - don't listen to him".

#israelfolau is the price we pay for #freespeech He has the right to say it and I have the responsibility to oppose what he says. #LGBT pic.twitter.com/g5iGvSydVS

Father Rod Bower told Premier he has no regrets.

"What he said was quite in your face especially for younger people who are working through sexuality issues," Father Bower said.

"Israel has one way of interpreting scripture but that's not the only way and certainly not the way I interpret scripture."

Folau has begun legal proceedings claiming the termination of his contract was unlawful. He says he's prepared to go all the way to Australia's highest court to defend religious freedom.