'I was faced again with people literally running away from the direction of the Cathedral': Dean of Southwark on London Bridge attack

Very Rev Andrew Nunn, Dean of Southwark has shared his experience of the London Bridge terror attack on Friday, in which a man fatally stabbed two people.

Rev Nunn said around the time of the attack he was returning to Southwark Cathedral after leading a retreat. He said it's hard to come to terms with the fact there has been another terror attack on the community.

"As I walked along Clink Street it felt as though time had suddenly shifted and I was back two and a half years ago as I was faced again with people literally running away from the direction of the Cathedral. I, of course, went against the tide and got into the Cathedral just as a lock-down was being put in place," he said.

"People who had come to the Friends' Christmas Market, visitors to the Cathedral as well as our wonderful staff and volunteers were all locked down. A visiting organist began playing some gentle and calming music. I led prayers with all those there, seeking to reassure them without really knowing what was happening.

"The news filtered through and as it did the police decided we were better evacuating the building. So we evacuated the place and left the cathedral behind as a cordon was thrown up around it, once again." 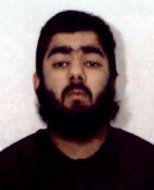 The London Bridge attacker was a convicted terrorist released half-way through a 16-year prison sentence for a plot to bomb the London Stock Exchange.

Usman Khan, 28, killed a man and a woman in the knife rampage on Friday afternoon and injured three other people, who are being treated in hospital.

He was attending a conference on prisoner rehabilitation organised by University of Cambridge-associated Learning Together at Fishmongers' Hall and "threatened to blow up" the building just before 2pm.

Armed with two knives and wearing a fake suicide vest, Khan was tackled by members of the public - including one with a narwhal tusk - before he was shot dead by police on London Bridge.

Rev Nunn said he is praying "for those caught up in the events, our admiration is for those, civilians and police, who went to the defence of others and risked everything in doing so.

"We know that Southwark Cathedral, London Bridge and the Borough Market are special places, embodying so much about the nature of our great city, holding to a belief in the strength that comes through diversity, always knowing that acts of terror can never defeat acts of love – but at the moment it hurts."

The Archbishop of Canterbury has also expressed his sympathy for those involved in the attack.

The sorrow and shock is heartbreaking for those caught up by the London Bridge attack and for the bereaved. The police and ambulance crews are wonderful. May Christ comfort them, and may our nation be given resilience, protecting the weak, strong in facing threats.

In a tweet, he also honoured the brave people who tackled Khan to the ground and moved his knife away.

As well as that, what a privilege to live in a country where casual passers by are so astonishingly brave. Whatever we disagree about during an election we can be united in celebrating such examples. Let those of faith thank God for the gift of such people, let all of us be glad.

The Faiths Forum for London encouraged the city to stand together in the midst of the tragedy.

Our Statement on the London Bridge Attack

Our prayers are with the victims, their families and all those affected by this terrible act