Hundreds of firefighters tackled the historic blaze through the night, battling to stop it wreaking complete destruction of the treasured facade after flames torched the roof, sending its spire crashing to the ground before crowds of horrified Parisians.

Meanwhile, teams raced to recover what treasures they could from the 850-year-old Gothic masterpiece, which housed priceless artefacts and relics of huge religious and international significance.

The blaze, which broke out as the last crowds of tourists ended visits at around 6pm BST (7pm local time), was finally declared to be "completely under control" nearly nine hours later.

However, it is expected to take several days to completely extinguish all remaining pockets of fire, dampen down hotspots and secure the world-famous edifice.

Attention is beginning to turn to what may have caused the landmark, part of which was being restored, to fall victim to such a disaster.

The Paris prosecutors' office said police will carry out an investigation into "involuntary destruction caused by fire", indicating authorities are treating the blaze as a tragic accident for now.

Arson, including possible terror-related motives, was earlier ruled out.

Visiting the scene on Monday night, French president Emmanuel Macron said a national subscription would be launched to rebuild the national monument.

It was reported by AFP that billionaire French fashion mogul Francois-Henri Pinault had pledged 100 million euros (£86 million) towards the effort.

"Notre Dame is our history, our imagination, where we've lived all our great moments, and is the epicentre of our lives," Mr Macron said.

"It's the story of our books, our paintings. It's the cathedral for all French people, even if they have never been. But it is burning and I know this sadness will be felt by all of our citizens." 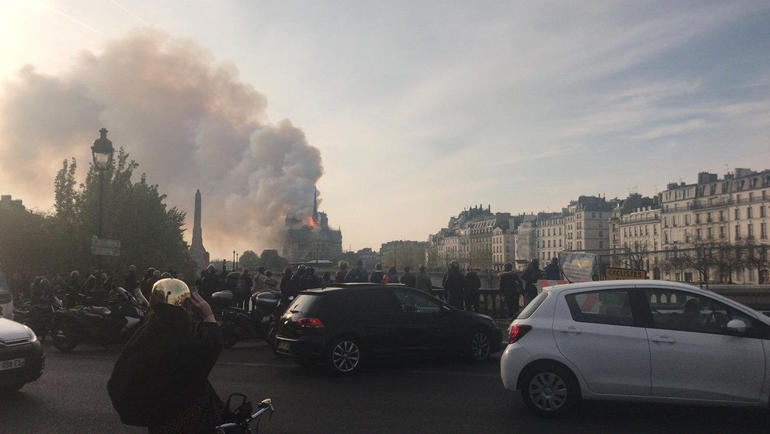 The first harrowing images from within the fire-ravaged cathedral began to emerge as firefighters brought the blaze under control.

A smouldering pile of what appeared to be the charred remains of the roof and spire lay smoking in front of the altar, while a cross that had escaped destruction glowed from within the gloom.

Gilded candlesticks, artworks and furnishings were among the treasures seen being rushed from the cathedral by a "human chain" before being bundled into trucks by police officers.

My thoughts are with the people of France tonight and with the emergency services who are fighting the terrible blaze at Notre-Dame cathedral.

Some of the cathedral's most precious objects, including a relic purported to be the crown of thorns worn by Jesus Christ on the cross, were whisked away to a secure facility.

Franck Riester, the French culture minister, tweeted that "Major parts of the treasure #NotreDame are now safe at the Paris City Hall".

Paris mayor Anne Hidalgo added: "The Crown of thorns, the tunic of Saint Louis and several other major works are now in a safe place." 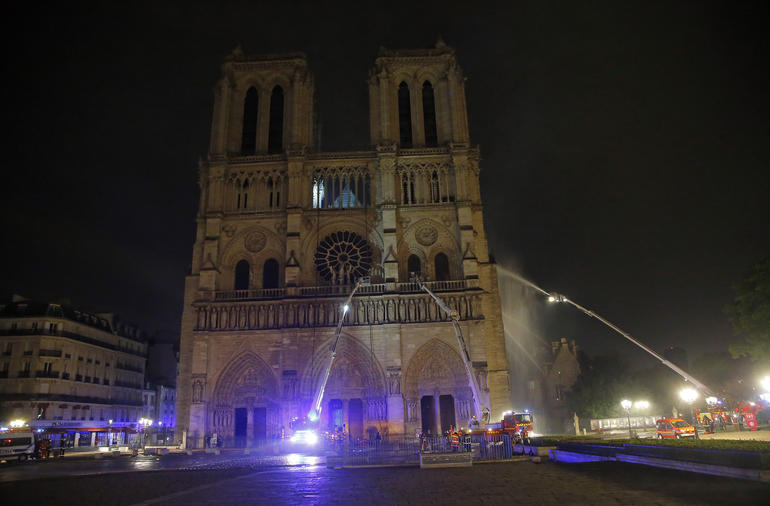 Despite fire racing through Notre Dame's roof, firefighters were able to prevent the blaze consuming the cathedral's main structure, including its two bell towers.

There were hopes that the three famous rose windows, which date back to the 13th century, avoided catastrophic damage, while the bells that have rung out at key moments in France's history were thought to be safe.

Concerns over the scale of the damage to Notre Dame came as expressions of grief were sent to Paris from around the world.

Notre Dame is one of the world's great treasures, and we're thinking of the people of France in your time of grief. It's in our nature to mourn when we see history lost – but it's also in our nature to rebuild for tomorrow, as strong as we can. pic.twitter.com/SpMEvv1BzB

Prime Minister Theresa May sent her wishes to the French capital from her walking holiday with her husband in Wales, where she is spending the beginning of parliamentary recess.

"My thoughts are with the people of France tonight and with the emergency services who are fighting the terrible blaze at Notre Dame cathedral," she said.

Meanwhile, the Archbishop of Canterbury Justin Welby tweeted: "Tonight we pray for the firefighters tackling the tragic #NotreDame fire - and for everyone in France and beyond who watches and weeps for this beautiful, sacred place where millions have met with Jesus Christ. Nous sommes avec vous." 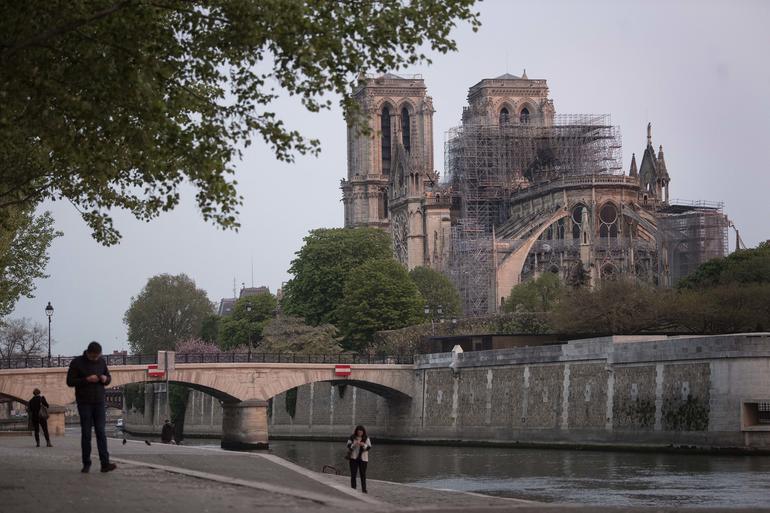 There were also messages of support from US president Donald Trump, former leaders Barack Obama and Bill Clinton and a stream of world leaders.

Notre Dame is one of Paris's oldest and most recognisable buildings, and work began on it in 1163.

The original structure was completed nearly 200 years later, in 1345, and its name literally translates to "Our Lady of Paris".

So horrible to watch the massive fire at Notre Dame Cathedral in Paris. Perhaps flying water tankers could be used to put it out. Must act quickly!

Some 13 million people now visit the Catholic landmark every year - more than 30,000 every day on average - according to its official website, and it is believed to be one of the most visited structures in the French capital.