How Donald Trump is being influenced by evangelicals

Evangelical Christians in the United States are having a direct influence on the decision making of President Donald Trump.

That's the claim being made by Johnnie Moore (pictured below) - the man who put together Trumps evangelical advisory body.

Speaking to Premier, Moore said you can see the impact being made.

"This administration has not only continued to ask for our advice but they have frequently acted upon our advice.

"I'm just a private citizen - I have no official relationship - but I've been in the White House now over 50 times and I've watched again and again the administration adjusting their point of view." Moore points to moves on the issue of pro-life and the appointment of Supreme Court judges as evidence to the influence evangelicals are having.

He also spoke of one high profile U-turn by Trump - the separation of immigrant families at the US border.

"A couple of days before, five or six of us flew to Washington DC and sat right across from him in the Oval Office.

"He made a totally different decision to what was planned because the evangelical community has a voice."

While some have questioned why evangelicals have drawn close to a president who stokes division and has questionable morality, Moore throws the accusations back at those who don't look to engage with Trump.

"There is a mentality amongst some that they just resist and I just think that's a very hard thing to justify as a Christian.

"We have to always be able to have a conversation when other people can't and we've decided - whether or not our advice is taken we're going to give it. 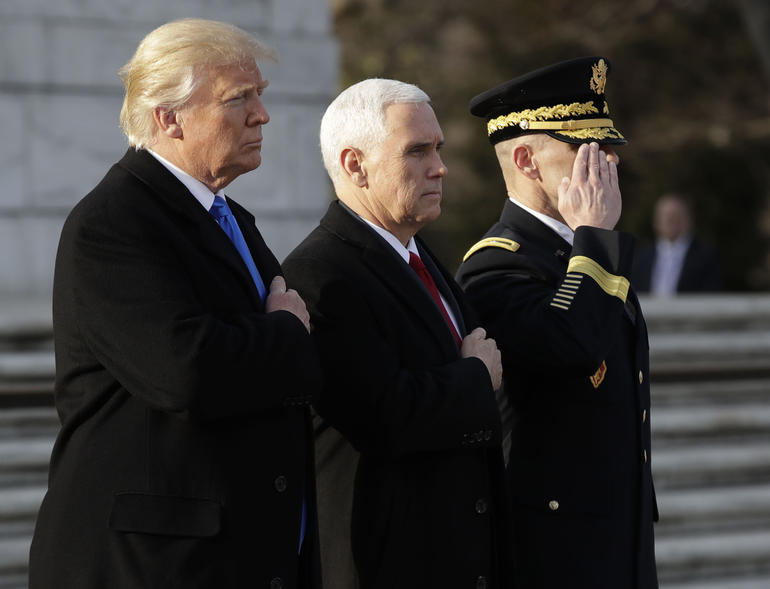 Donald Trump, accompanied by Mike Pence pauses after placing a wreath at the Tomb of the Unknowns on Thursday

He said: "There are more evangelical Christians in this government than in any in American history.

"There are Bible studies in the White House, Mike Pence (pictured above) is a devout Christian and there is more prayer in that building than since our early history."

Johnnie Moore was speaking to Premier Christianity's Sam Hailes. Hear the full interview on a forthcoming edition of The Profile. Subscribe to the podcast at premierchristianradio.com/theprofile