A far-right group supporter has been jailed for six years after a month-long hate campaign which included spray painting a church and landmarks with swastikas.

Austin Ross, 23, stuck racist posters on buildings around his home town, as well as torching a school and a masonic lodge, causing tens of thousands of pounds worth of damage.

A court heard Ross was both a supporter of Tommy Robinson and far-right group System Resistance Network, and painted their initials SRN, as well as messages such as Free Tommy Robinson on buildings.

Between 2nd May and 31st May this year he spray painted Nazi symbols and stuck racist propaganda on to landmarks around his hometown of Newport, south Wales.

Mr Howells said: "The poster was linked to the System Resistance Network, and there were swastikas spray painted next to it."

His next target was Newport's multicultural Maindee Primary School, where parents reported seeing racist posters outside it referring to refugees, and the message "You have been visited by the SRN".

Ross returned to the school four days later to spray paint several swastikas on its walls. 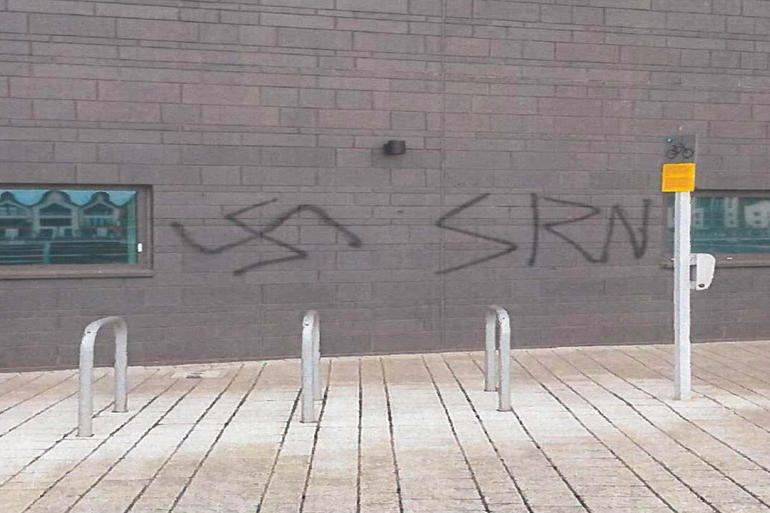 Undated handout image made available by the Crown Prosecution Service of swastikas and the letters SRN (System Resistance Network) which were spray painted on a wall in Newport.

The slogan "1488" was painted by Ross on to the outside wall of Gwent Probation Services - with 14 being code for "We must secure the existence of our people and a future for white children" coined by white supremacist David Lane, and 88 being code for "Heil Hitler".

Ross also wrote "Free Tommy Robinson" along with graffiti of swastikas at the University of South Wales campus.

Gwent Police released CCTV recordings to the public which caught Ross in the act of several of the incidents, which resulted in him being identified after an anonymous tip off.

Police raided his home and found stencils of swastikas, and posters which read "Keep Britain White" and "Hitler was right".

Harry Baker, defending, said: "There's a different side to this young man.

"His family are concerned and upset for him."

Undated handout image made available by the Crown Prosecution Service of a swastikas which were spray painted on a school sign in Newport, south Wales by Austin Ross

Judge Jeremy Jenkins told Ross: "Your actions were not born out of some mental disorder, but out of sheer hatred and malice, based on a perverse view of race and religion different to your own."

The judge added: "People like you have no idea what living under a tyrannical regime is really like."

Ross, from Romney Close, Bettws, Newport, showed no emotion as he was jailed for six years.