A new book is to claim the former head of Catholics in England and Wales, Cardinal Cormac Murphy-O'Connor, led a secret campaign for Pope Francis in the run up

A biography of the Pontiff will say he had a discreet, but highly organised drive to get the then Caridinal Bergoglio elected. 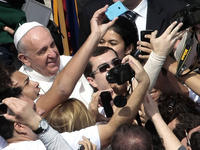 It's thought the group of clergy felt they had to take action after an initial attempt to elect Francis failed in 2005.

At the conclave that elected Pope Emeritus Benedict it's claimed Caridinal Bergoglio urged others not to vote for him as he didn't feel ready.

But author of the new book Austen Ivereigh told Premier he would have been aware of the campaign in 2013.

He said: "He really is the ideal man at that moment in 2013 and he himself has the humility to recognise that.

"This is actually about the mission, it's about the reform that's needed and he knows that others see him as able to do that, and he accepts that."

It's claimed Cardinal Murphy-O'Connor teamed up with German cardinal Walter Kasper to elect a man who would reform the Church.

Mr Ivereigh said it was not unusual for canvassing to happen in the run up to conclaves: "It takes a group of cardinals to say to other cardinals we know this man, we think he's the man," he said, "In the same way this group of reformist cardinals in 2013 were able to make a very convincing case for Bergoglio, but that doesn't make it a political process."

The Great Reformer is published in the UK on December 4.