XR organisers have planned to shut down key sites in central London, in addition to demonstrating outside government departments.

The protests come following what's been described as a series of disappointing climate commitments from rich world countries at a summit in New York and a major report from the UN's expert science panel, the IPCC, which warned of unprecedented consequences to the world's oceans and ice systems without drastic action from governments.

Together with charities Christian Aid, Tearfund, and CAFOD, CCA are demanding the Government reduce carbon emissions to zero by 2025 and to be more transparent about the global impact of climate change on vulnerable communities. 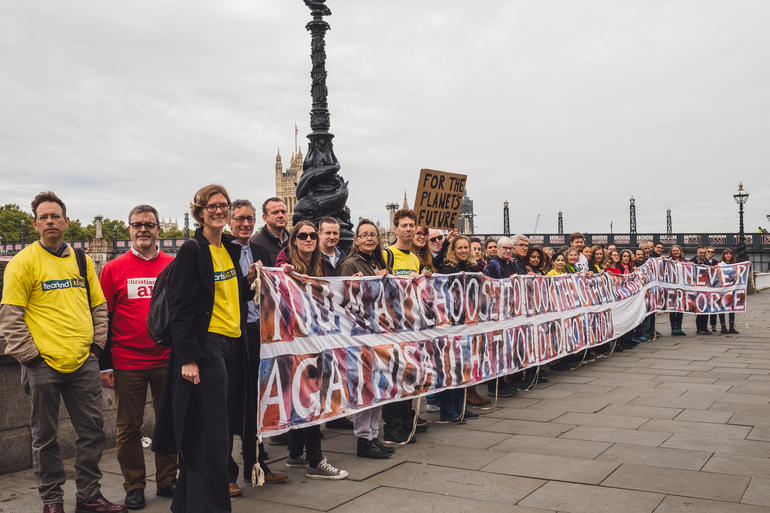 They also want to see a citizens' assembly established to combat the climate emergency.

CCA member Rev Helen Burnett is a vicar at St Peter & St Paul's Chaldon in the Diocese of Southwark.

Speaking to Premier at the Lambeth Bridge protest she said a citizens' assembly would help to protect the needs of those in poverty.

"It's a way of divesting decision making away from the kind of combat models that we have in the House of Commons into something more cooperative, in which people are working for the common good, not for the good of the wealthiest."

Helen says the locations of the London protests are strategic and the disruption they cause to the public are necessary to highlight the severity of the problem.

She said: "Lives have been disrupted throughout the world because of what's happening to the climate.

"This is a tiny disruption compared to what is happening to brothers and sisters who are suffering, massive climate change, floods, droughts, and so on.

"So it's the level of disruption that we feel is compatible with the desperate need. We're hoping to target the corridors of power so we have specifically chosen places in London that will most greatly affect the places where the power sits."

XR previously lead a series of Easter protests, urging the government to do more to protect the planet from rising carbon dioxide levels.

When asked what impact she hopes these October protests will have, Helen said perseverance and commitment were vital to bring about change.

"The Easter rebellion was hugely effective, the whole issue of climate emergency in to the public domain in a much bigger way than it was before and the government also came out and did declare a climate emergency.

"Sadly, they didn't act upon that. So we feel the need to keep disrupting, keep challenging, in order that the government will actually take serious action as opposed to just making empty statements.

She went on to say that Christians have an opportunity to model the sacrifices needed to combat global warming.

"We need to live differently. We know that this is both a spiritual and physical crisis that we face.

Among the activities taking place on Lambeth Bridge from Monday include a prayer vigil, baptisms, a daily Eucharist, worship and foot washing sessions.