A large number of children from a church youth club were among those evacuated from a building near the car bomb in Londonderry.

The device was detonated at 8:10pm on Saturday on Bishop Street, leaving a car on fire, and has been called 'utterly reckless' by police.

No one was injured and the attack has been condemned by politicians such as the DUP's leader Arlene Foster and the Mayor John Boyle.

The Police Service of Northern Ireland's Assistant Chief Constable Mark Hamilton said hundreds of people, including hotel guests and children from a church youth club were evacuated from the area.

"At around 7.55pm last night officers on patrol in Bishop Street spotted a suspicious vehicle and were making checks when, around five minutes later, information was received that a device had been left at the courthouse," he said.

"We moved immediately to begin evacuating people from nearby buildings including hundreds of hotel guests, 150 people from the Masonic Hall and a large number of children from a church youth club."

The youth were from the local Catholic church, who posted on Facebook that their services would be cancelled on Sunday morning, saying: "Morning services at St Augustine's Church and St Columb's Cathedral have been disrupted as a result of last night's car bombing in the centre of Londonderry.

"The Bishop Street Within area remains cordoned off while the Police carry out a follow-up operation. The Archdeacon of Derry, Ven. Robert Miller, has invited parishioners of both churches to attend services instead at St Peter's Church on the Culmore Road (11.30 a.m.) or Christ Church on Infirmary Road (11.00 a.m.)."

Morning services at St Augustine's and St Columb's Cathedral have been disrupted as a result of last night's car bombing in the centre of Londonderry. The Bishop Street Within area remains cordoned off while the... https://t.co/Cdv41LBGqg

The Rt Rev Ken Good, Bishop of Derry and Raphoe, condemned the attack, saying times had changed: "Last night's bomb attack in the centre of Londonderry was an act of utter recklessness which showed a callous disregard for the lives and safety of local citizens and visitors alike.

"It defies belief that anyone would place a bomb on a city-centre street, early on a Saturday evening, so close to people's homes, churches, an hotel, sheltered accommodation, nearby pubs and a large car park. St Columb's Cathedral and St Augustine's Church – where a group of young people had been meeting yesterday evening – have both had to cancel their Sunday morning services while the Police carry out a follow-up security operation.

"I am thankful to all our emergency services for the courageous way in which they responded to the initial explosion and to the subsequent alert.

"I am extremely thankful that no one was injured – or worse – as a result of last night's explosion.

"The attack was wrong. It is indefensible. It should never be repeated. The time has long since passed when such violence should have been consigned to history.

"I urge anyone with information about the bombing to share it with the Police." 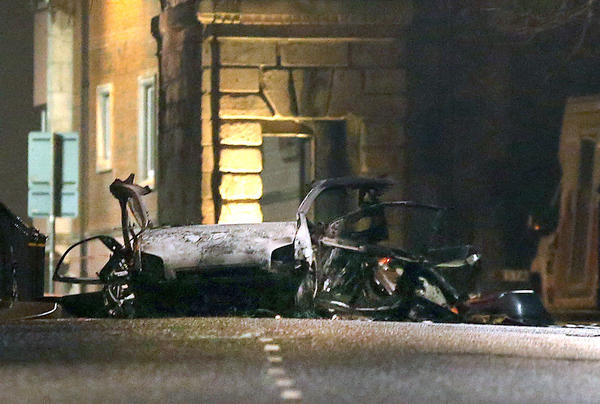