The moderator of the Presbyterian Church in Ireland has urged young people to read a new book on the Troubles to prevent a return to the dark days.

Rev William Henry conceded that in the past Protestants had "not been good" at telling their stories, and emphasised the need to be aware of the pain caused by the legacy of the past.

He was speaking at the launch in Belfast of the new book, Considering Grace: Presbyterians And The Troubles.

It was compiled over three years from 120 interviews with ministers, victims, members of the security forces and peace-makers, among others.

In the book he recalls feeling anger for years, recalling shouting at God "behind the wind and the waves" as he walked along Ballycastle beach.

Now he says the pain remains but his faith gives him and his family the grace to get through it.

Rev David Cupples was at the scene of the IRA's Remembrance Sunday bomb in Enniskillen in 1987.

He described feeling that if Ronnie Hill, who had been left in a coma by the attack, had died, it would have pushed him "over the edge".

He recalled telling a colleague: "I honestly fear I am about to go over the edge. If a phone call comes through that Ronnie has died, I don't think I can cope with it.

"When I started to pray, I cried in a way I never cried in my life, before or since. There was just this absolutely enormous reservoir of pain and sorrow that built up during the course of the week." 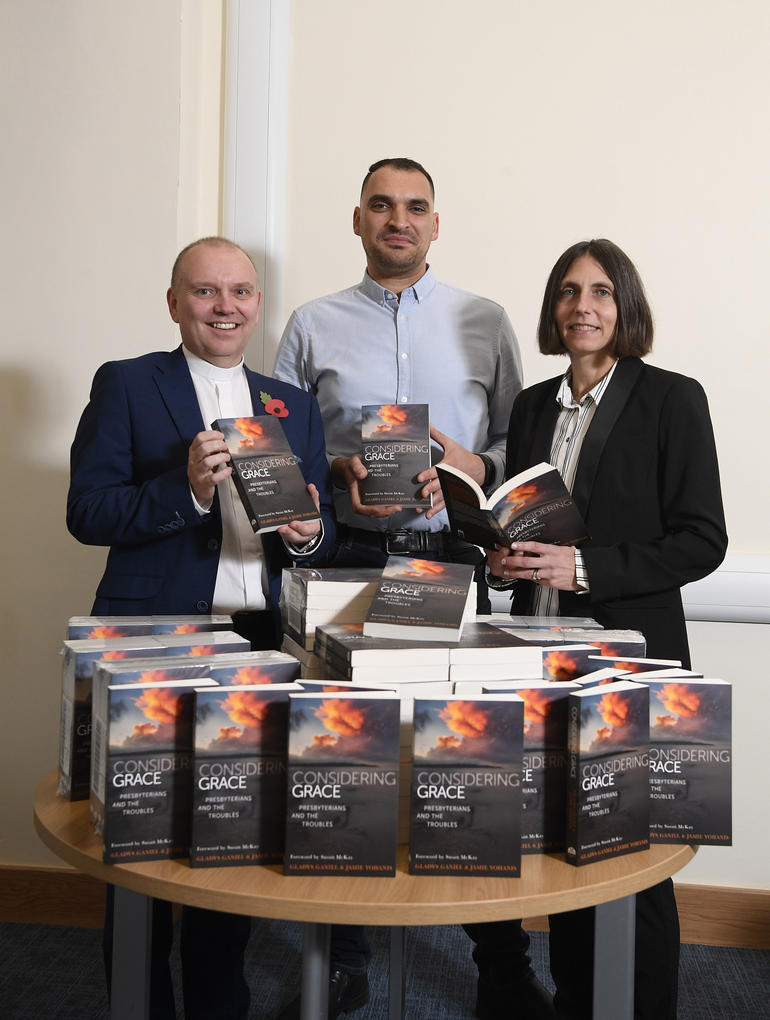 Presbyterian Moderator Rev William Henry and co-authors Gladys Ganiel and Jamie Yohanis at the launch in Belfast of a new book, Considering Grace: Presbyterians And The Troubles.

Mr Paisley was a strong critic of the Presbyterian Church and often picketed its annual general assembly.

Some ministers told the book's authors they feared peace-making efforts would leave them vulnerable to attack from Mr Paisley and his church, citing the example of the Rev David Armstrong at First Limavady church.

Mr Armstrong was asked to resign in 1985 after reaching out to Catholics in his town.

The interviewers say while they did not ask people about Mr Paisley, most brought him up.

One told them: "We were under pressure from the Paisleyite faction who would be very quick to say Traitor. Paisley was a great problem for our ministers. A lot of ministers would have loved to have said and done more but that Paisley threat inhibited them from saying too much, too plainly, too publicly."

The book also explores an assertion that the larger churches did not do enough to contribute to peace, although some "mavericks" did so, it was as individuals.

Rev Rodney Beacom is recorded as saying victims of terrorism felt forgotten about.

"When I look at the families in my congregations who are still suffering because of the Troubles, the reality is they feel forgotten and ignored ... those people feel as if they've been abandoned by the state and abandoned to a lesser extent by the church," he tells the book.

The moderator described the book as remarkable.

"In no way are we going to say that we have done everything we possibly could and done everything perfectly, it's mature to be able to say we could do better," Mr Henry said.

"There's huge pain that comes out when you read the book and it's really quite remarkable to see that and let that impact.

"I think it's important that particularly our younger people are able to look and to read and to see what we have gone through.

"When you look out and see the danger and how easy it is to slip into the polarisation that we see in society, it's a reminder that we don't want to go there and if we can do anything to prevent that, we need to be playing an active role.

"We dare not go back to these days."