Christians for Independence: We will win

MSP Dave Thompson said the result would be close but the case for independence had the momentum and would win.

On 18 September voters in Scotland will be asked the Yes or No question 'Should Scotland be an independent country?'

He added: "I've been knocking on doors for a long time now and the responses we're getting from people on the door steps are absolutely fantastic,"

But Christian Conservative MSP Murdo Fraser told Premier: "If yes is going to win this they have a huge amount of work to do by the end of this week and indeed over the next three weeks.

"To me, voting no is saying we're confident in Scotland but we believe we're better off as part of a stronger United Kingdom and we don't want to break those ties."

Last night Scotland's First Minister Alex Salmond and the leader of the pro union Better Together campaign Alistair Darling debated on the BBC.

In a heated exchange they discussed currency, the NHS and nuclear weapons.

After the debate a poll by The Guardian newspaper and polling company ICM showed Mr Salmond had won by a massive majority. 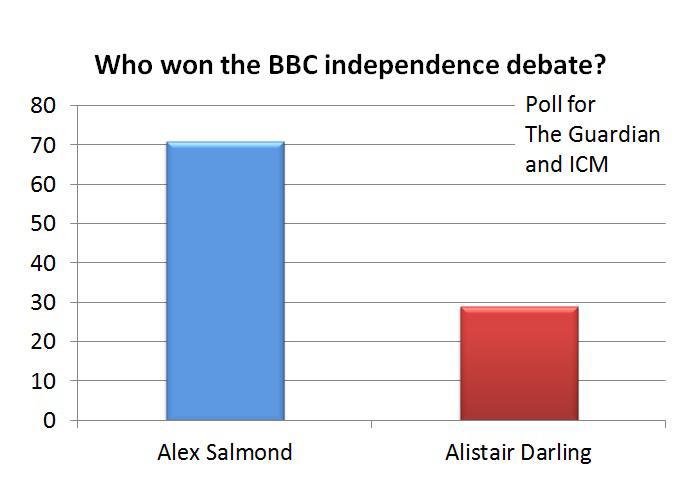 Alistair Darling again challenged the leader of the SNP on currency claiming the First Minister had no 'plan b' if using the pound in union with the rest of the UK didn't work out.

"You are taking a huge risk if you think it is just all going to fall into place," he said.

He added: "I think the currency union would be bad for Scotland because our budget would have to be approved not by us, but what would then be a foreign country. It wouldn't be best for the rest of the country either."

Mr Salmond replied: "I set out the options very clearly - three Plan Bs for the price of one. They are just like buses... you expect one and then three turn up at once.

"We don't need permission to use our own currency. The argument actually is that they will deny us the assets of the Bank of England.

"The reason that won't happen is that if you deny us the financial assets, then the UK will get stuck with all of the liabilities."