Christian school opens in Iraq after 4 year takeover by IS

A Christian primary school will welcome pupils for the first time after being forcibly converted into an Islamic State military base for four years.

According to freedom charity Open Doors, St Joseph's primary school was taken over by Islamic State just after it was built in 2014.

Following an invasion by IS militants, thousands of children were forced to flee from the town of Qaraqosh with their families, while the new school was quickly transformed into a military base.

Qaraqosh has the largest Christian population in the Nineveh Plains, northern Iraq.

After the liberation of the city, also known as Bakhdida in 2016, the residents found the school destroyed and looted.

With the support of Open Doors and other organisations, reconstruction work was started immediately and the IS base was transformed back into a Christian primary school.

There are currently 130 students studying there, and the school hopes to expand and admit secondary school students next year.

Father Ammar Siman who oversees the school said: "If you give students good education, they will be the leaders, doctors, engineers of many parts of Iraq, they will be the people who will bring changes for Qaraqosh in future. That is why we need to invest in education."

While Basma, 11, drew a map of Iraq with a palm branch, the symbol of peace, she said: "My dream is that we have peace in our country, and we collaborate." 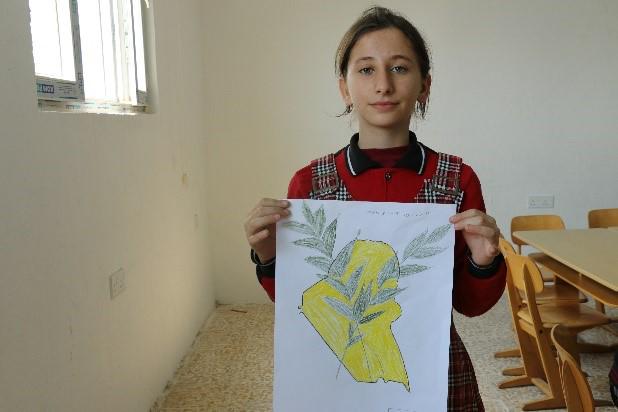 Iraq is number 13 on the Open Doors' World Watch List, a ranking of 50 countries where it is most difficult to leave as a Christian.

Three years ago, Open Doors launched the global Hope for the Middle East campaign, to draw international attention to the persecution of Christians in Iraq and Syria.

Since then, with the help of Open Doors' local church partners, over 1,000 families who were forced to flee their homes by IS have been able to return to the Nineveh Plain and have begun to rebuild their lives and communities.

Many houses, schools and churches destroyed by IS have already been renovated or rebuilt.