Christian charity: We want a Colombia where war is not normal

A Christian humanitarian charity is urging both the government and a major rebel group not to walk away from a peace agreement in Colombia, despite voters rejec

Despite pre-referendum polls predicting victory, Colombians voted 50.2 per cent in favour of rejecting the proposed accord with the Revolutionary Armed Forces of Colombia (Farc) which sought to bring an end more than half a century of hostilities.

Speaking on Premier's News Hour programme, Ulrike Beck from CAFOD said: "[Peace] would be an enormous change. Many people have grown up only knowing conflict because it has been a conflict [spanning] more than 50 years.

"There was a tremendous hope and I think the hope is still alive that people can live in a country where war is not normal." 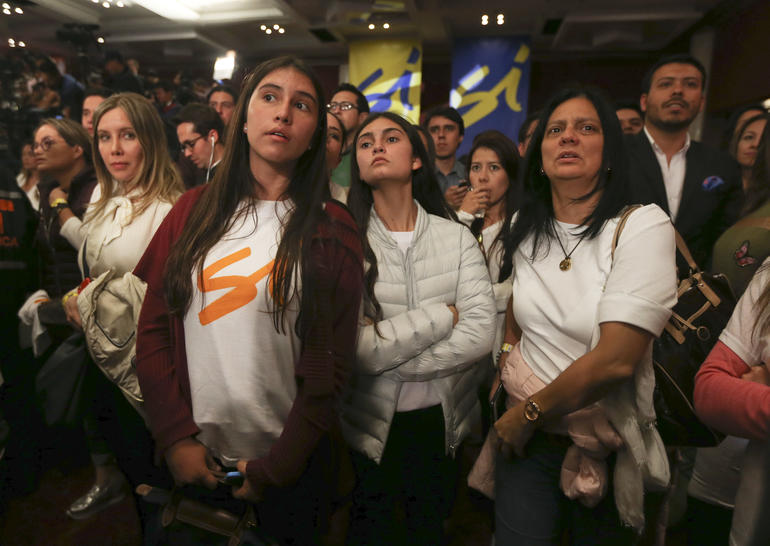 The peace deal, which involved four years of planning, would have seen rebels from the Farc offered ten seats in congress and spared jail if they confessed to their crimes.

Speaking during a television address where he appealed for calm, President Juan Manuel Santos said: "I won't give up. I'll continue search for peace until the last moment of my mandate."

Signed less than a week ago by Colombia's president and Farc leaders, it gained support from UN Secretary-General Ban Ki-moon and US Secretary of State John Kerry, however, it needed to be supported by voters before it could be enforced.

The Farcs top commander, known as Timochenko, said: "The Farc deeply regret that the destructive power of those who sow hatred and revenge have influenced the Colombian people's opinion.

Reacting to the referendum result, former-president Alvaro Uribe, who led the grassroots campaign against the deal, called for a "big national pact" which guarantees justice without impunity.

Ulrike Beck from CAFOD added: "It's not only Farc who are in this armed conflict, there are also other guerrilla groups in Colombia, such as ELN (The National Liberation Army).

"We're hoping that the peace negotiations would also include ELN and other armed actors so that they can finally reach peace in Colombia."

Chief Executive Mervyn Thomas of the anti-persecution organisation, Christian Solidarity Worldwide, said: ''CSW urges all parties to honour their promise to continue working towards a peace agreement in Colombia. Over 50 years of internal armed conflict has left millions of victims.

"We hope and pray for a peace agreement that meets public approval, and for a truth and reconciliation process that uncovers the human rights violations committed by all actors in this conflict and brings some measure of clarity and peace for the victims and their families."