Charities operating in the besieged city of Aleppo have released a 'message to the world' about the horrors of the massacre taking place.

The message comes as the UN revealed that civilians were being shot at point-blank range by pro-government forces in eastern Aleppo.

Charities working in the region, including Christian Aid, have reported that around 50,000 civilians are caught up in the violence.

Máiréad Collins, Advocacy and Programme Officer for Syria at Christian Aid, added: "What we are witnessing in Aleppo right now is horrifying. We are seeing the massacre of innocent men, women and children in their homes and on the streets, while the world watches in a state of paralysis.

"Christian Aid, like thousands of other NGOs and civil society organisations, call again for an immediate ceasefire and humanitarian access to civilians in besieged areas."

The charities add that there is no safe access in or out of eastern Aleppo and there is no access to food, water or medical assistance for the people trapped there. 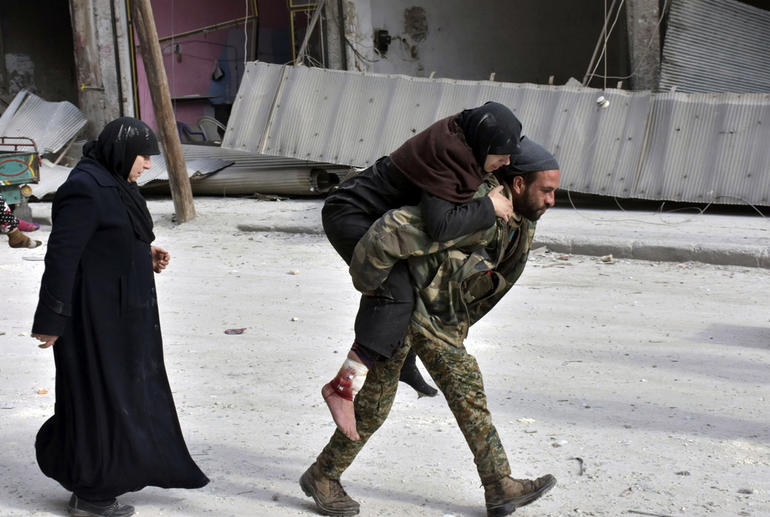 An injured woman being carried by a Syrian soldier

Pro-government forces have reportedly killed 82 civilians "on the spot" as they closed in on the last rebel enclave in Syria's Aleppo, the UN human rights office said.

That and other reports of mass killings, which could not be independently confirmed, reinforce fears of atrocities in eastern Aleppo in the final hours of the battle for the city - which has been split between rebel and government control since 2012.

Speaking on Premier's News Hour, Jeremy Moodey from the Christian charity Embrace the Middle East said that Christians must pray for those caught up in this horrific war.

Moodey said: "Some civilians are being held as human shields by the rebels, it's been reported by the UN that others are being killed by pro-government forces... we need to absolutely pray for peace, safety for civilians, for compassion and mercy on the part of the victors, and for the end to sieges."

Listen to Jeremy Moodey speaking to Premier's Alex Williams on the News Hour: