Mr Li was a well-known lawyer who defended farmers and Christian pastors, work that garnered him an award from the Washington-based National Endowment for Democracy in 2008.

He died just hours after being admitted to No 81 People's Liberation Army Hospital for a minor stomach ache, a relative of Mr Li's told Bob Fu, a Christian activist who has known the lawyer for over a decade.

Mr Fu said in a statement through his US-based Christian non-profit group China Aid that the "Chinese regime should be totally held accountable" for Mr Li's sudden and "mysterious" death.

"The hospital alleged that he had liver problems and that he bled to death, but Li was previously healthy," the statement said.

"China has a history of either neglecting the medical conditions of human rights activists until they succumb to them or declaring previously healthy people dead." 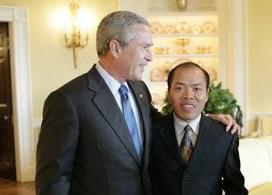 A spokesman for the hospital said he had not heard of Mr Li's case.

"I do not know who this person is," the spokesman added, saying that death and causes of death are a "private matter".

Mr Fu and Mr Li attended the National Prayer Breakfast in Washington together earlier this month.

William Nee, a China researcher for Amnesty International, said: "We do not know for certain whether those injuries may have contributed to his declining health, but the Chinese government should, as a party to the UN convention against torture, conduct a prompt and impartial investigation to determine whether those injuries may have played a role in his untimely death.

"The government has the obligation to ensure that lawyers can carry out their professional duties without fear of intimidation or interference, and without being identified with their clients and causes."