Reports that Mother Angelica, founder the EWTN cable network, had been given a feeding tube has worried her strong Catholic following, however her Sisters say i

Mother Angelica suffered a stroke in 2001 and her Sisters in her Alabama monastery say that the tube is not a final attempt to keep her alive, saying that the 92-year-old nun has regained some strength and weight.

Luke Johnasen, a spokesperson for her order said: "When people see 'feeding tube' they think, oh no, it's getting serious.

"The Lord is in charge, she may be taken tomorrow, we don't know," he told Religion News Service.

"But at least the initial intent of the feeding tube was not an end-of-life kind of thing but to assist her and help her get the nutrients she was lacking," said the Poor Clares of Perpetual Adoration at Our Lady of the Angels Monastery in Hanceville

He told worried onlookers that Mother Angelica is now able to eat some foods and can receive the bread and wine of the sacraments most days.

However he added that she remains confined to bed and is sleeping a lot. 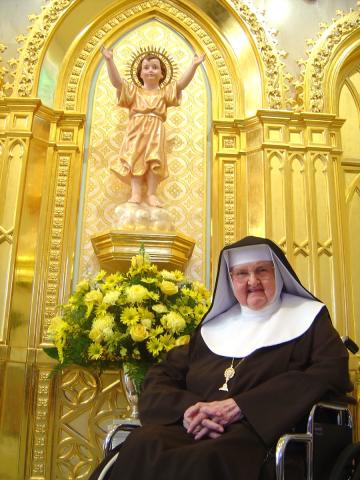 She is unable to communicate except by squeezing a visitor's hand, or with a smile: "When she's awake her mind is very lucid.

"She knows who people are," Luke Johnasen said.

Mother Angelica has a devoted following despite having not spoken or communicated in many years.

Mother Mary Angelica of the Annunciation was born Rita Rizzo in Canton, Ohio, in 1923.

She entered the Poor Clares, a branch of the Franciscan order, in 1944 and went on to found a monastery in Alabama, in 1962 and in the 1990s started the Shrine of the Most Blessed Sacrament.

She is most well-known for her successful Eternal Word Television Network (EWTN) the Catholic cable channel she started in 1981.

In 2001, she suffered a series of strokes that limited her appearances on the channel and a haemorrhage later left her largely incapacitated.

Today EWTN claims to be "the largest religious media network in the world," according to Religious News Service.