Calm urged as Anglican split over sexuality threatens to deepen

Anglicans on both sides of the sexuality debate are being encouraged to calm the rhetoric ahead of a very important meeting next year.

Bishops from across the world are due to come together for the once a decade Lambeth Conference but there's concern many will boycott.

Conservative group GAFCON says its bishops won't attend due to the fact gay bishops will be permitted to attend.

Conservatives within the Church are also unhappy at how they've been portrayed by the Anglican Communion.

Speaking at the Anglican Consultative Council last week, Archbishop Josiah Idowu-Fearon (pictured below right) said the divide in the Church was due to "largely autocratic Primates and bishops in the Global South who do not behave as Anglicans".

The Evangelical Fellowship in the Anglican Communion (EFAC) has written to him to ask him to reconsider his words. 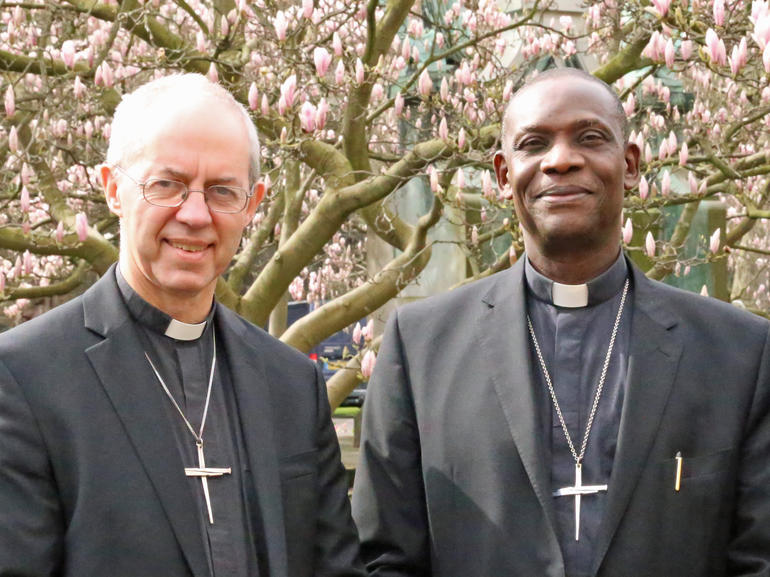 Speaking to Premier, EFAC trustee Carl Hughes said: "You have to be realistic that there is a clear disagreement about human sexuality from a doctrinal point of view, across the Anglican Communion.

"What I think we were concerned about, as trustees, when we read what Archbishop Josiah said, was a suggestion that it was actually the groups like EFAC and GAFCON, who have held to the traditional teaching of the Church, that it is these groups that have moved away from the Anglican Communion whereas, actually, the differences that have arisen all started with the Episcopal Church in the United States acting independently over the consecration of (gay bishop) Gene Robinson back in the early 2000s and then the independent actions of other liberal provinces within the Communion which has caused the fabric of the communion to tear apart."

GAFCON has also announced this week that it will be holding a rival event to the Lambeth Conference in June 2020.

That's despite the Archbishop of Canterbury banning the same sex partners of bishops from attending Lambeth as a way of appeasing conservatives.

With the divide set to deepen over the coming months, Carl Hughes is urging calm.

"I believe that everyone should speak in a measured and respectful way, acknowledging that there are clear differences of view," he said. "However, I think that we are probably in the position where those differences in view are irreconcilable in that they are a matter of one's particular view of doctrine and what the Bible does and doesn't say. But that doesn't mean that everyone shouldn't treat each other with respect and listen carefully to what the others are saying."