A man is being questioned by police over 39 people found dead in a refrigerated lorry in Essex yesterday.

Local media reports that Mo Robinson, 25, from Portadown, County Armagh, was arrested on suspicion of murder on Wednesday by Essex Police.

Officers in Northern Ireland have raided two houses and the National Crime Agency said it was working to identify "organised crime groups who may have played a part".

The trailer arrived in Purfleet on the River Thames from Zeebrugge, Belgium. 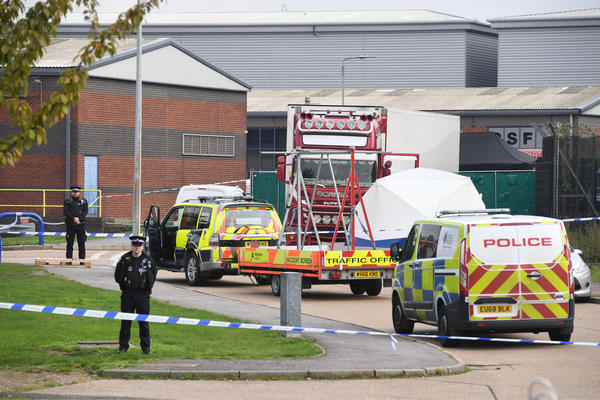 Bishop of Chelmsford, Rt Rev Stephen Cottrell told Premier he was "horrified" after hearing the news as he came out of the chapel after morning prayer on Wednesday, he said: "I don't know why it makes it seem more horrific when it's on your doorstep but somehow it does and it seems to me to be the saddest reflection of where we've got to as a world.

"We live in a world where on the one hand, there is the most terrible human trafficking - we don't know and dread to think what purposes those people were in when they climbed into that lorry we just don't know, we may never know. There is also great desperation of people wanting to move around the world to escape horrors elsewhere.

Bishop Stephen said we are all responsible, saying: "We have helped make the world where these things happen and we must respond by doing all that we can to prevent the necessity for this to happen and also clamp down on the criminal activity that sometimes feeds on the desperation of others."

Shaun Sawyer, the Chief Constable of Devon and Cornwall Police and the National Police Chiefs Council lead for modern slavery and human trafficking, said the incident is a tragedy that law enforcement, NGOs, the church and faith groups are working "every single moment of every single day" to prevent.

"So how many have we prevented? How many lives that we saved? Turn it on its head" he said.

"It will be hundreds and thousands. But sadly, tragically, for 39 people that didn't work yesterday," he told BBC Radio 4's Today programme.

Mr Sawyer said: "You can't turn the United Kingdom into a fortress."

He said even if there were routes that were perceived as easier to get through, organised criminals would still exploit people who do not access those routes.

Local vicar, Reverend David Peterson from St Clement's church - which is about five minutes' walk from the industrial park - told Premier: "Everybody's just been willing to open up their doors for people to come in for reflection, to really share their thoughts and have a space to pray as well."

The church held a Holy Communion service on Thursday for anyone to come and light a candle for the people who lost their lives.