BBC gets more than 1,200 complaints over Songs of Praise gay wedding

There have been 1,238 complaints sent to the BBC after it broadcasted a gay wedding on Songs of Praise for the first time.

Viewers complained that featuring a same-sex wedding on the show was offensive to Christians.

The episode called Faith and Marriage aired on BBC 1 on 18th August.

The episode included the wedding of Jamie Wallace and Ian McDowall at the Rutherglen United Reformed Church in Glasgow.

The pair were the first same-sex couple to marry at the church after the local congregation gave its support.

"A good lady who comes to this church told us in one of our discussions, people will change, and don't underestimate older people, either. They just need to think about it, and they'll get there one day."

The BBC has stood by its decision. 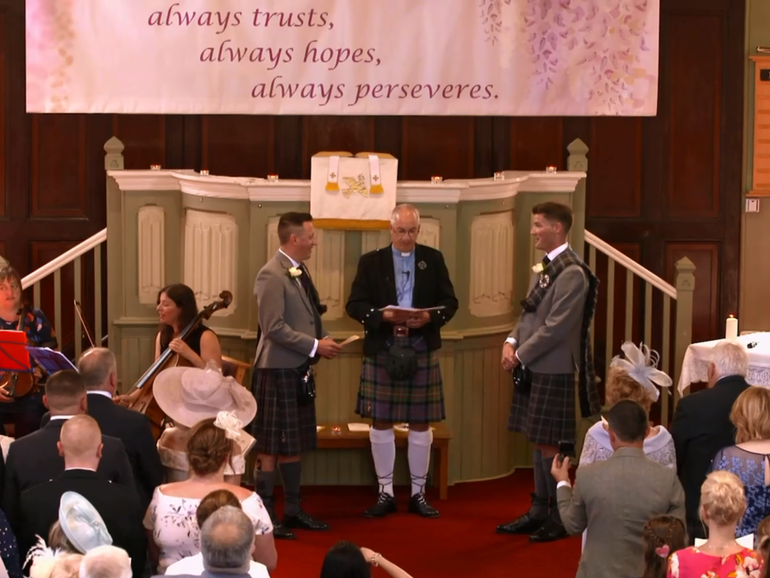 Songs of Praise executive producer Cat Lewis said: "We understand this is a sensitive subject, but the United Reformed Church is the sixth biggest in the country and as Britain's only Christian TV series, it is very important we reflect all aspects of the faith."

A BBC spokesman said: "Songs of Praise tells the stories of Christians across all denominations in the UK and in so doing, aims to reflect the balance of opinions on different issues.

"We featured the wedding of James and Ian to find out what it meant to them as Christians, to be able to take their vows in church."

The BBC also received 400 letters from people applauding the decision to air the wedding that reflects "modern Christianity" the spokesman added.

The United Reformed Church is one of a few denominations in the UK to permit same-sex unions, alongside the Scottish Episcopal Church and the Quakers.

The Methodist Church in the UK and Church of Scotland are among other denominations reviewing changes that would allow same-sex weddings.