A church leader in Athens has asked for prayers as the death toll from the forest fires near the city has increased to 74.

Wildfires have raged through seaside resorts near the Greek capital, killing dozens of people and causing tourists to flee.

Rescuers battling through the blazes which destroyed homes and forests near Athens discovered 26 bodies huddled together at one holiday compound, all believed to be family members. Some of them were hugging.

Many tourists and residents fled towards the coastline to escape the flames and choking smoke. 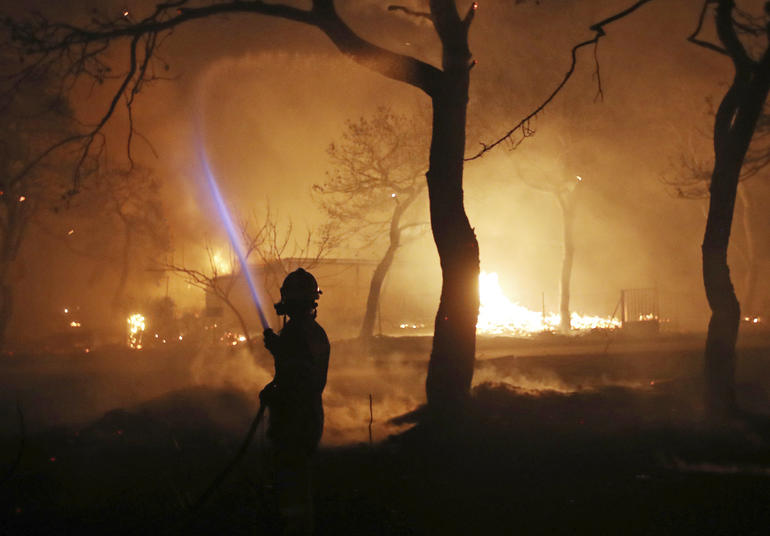 He told Premier News Hour one member of his congregation was injured in the blazes.

"One person is in fact in hospital here in Athens suffering from smoke inhalation and that person's house has been destroyed by fire and so has her car."

The two largest wildfires - one 20 miles north-east of Athens near Rafina, the other 30 miles west of the capital in Kineta - broke out on Monday during hot, dry summer conditions.

Fanned by gale-force winds that frequently changed direction, the flames spread rapidly into populated seaside towns - too fast for many who were in their cars or homes to flee, fire department spokeswoman Stavroula Malliri said.

Canon Doolan urged people to pray for all those impacted by the tragedy.

He said: "Stand alongside us in prayer, whatever it is that's happening or has happened to people here we just commend the whole situation to God.

"And for the person I visited in hospital. We praise God she was spared because she did say to me she doesn't know how she survived."

Download original A house burns in the town of Mati, east of Athens, Monday, July 23, 2018.

Greece's Prime Minister Alexi Tsipras has declared a three-day period of national mourning for the victims of the fires.

Forest fires are common in Greece during the hot, dry summers, and temperatures recently hit highs of up to 40C.