The Association of Ukrainians in Great Britain
UK News

The first UK visit by the head of Ukraine's Catholic Church in nearly 50 years has excited expatriates living in northern England.

Archbishop Sviatoslav Shevchuk arrived from Kiev on Thursday for a tour of the region to mark 60 years of the Ukrainian Catholic Church in the United Kingdom.

His Eminence visited a member church and community centre in Salford on Sunday morning, before attending All Saints Ukrainian Catholic Church in Bolton. 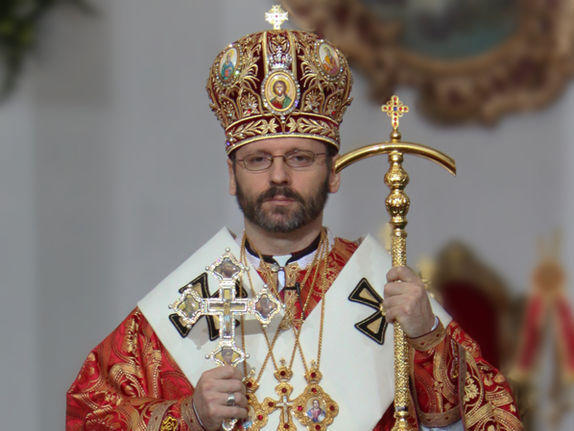 All Saints member and head of the local Association of Ukrainians in Great Britain branch, Yaroslaw Tymchyshyn told Premier the trip marks a time for local Ukrainians to celebrate.

Explaining the significance of Archbishop Sviatoslav Shevchuk's visit felt particularly by older Ukrainians, he said: "From them, this will be a celebration [of] the fact that they will never, ever see another head of the Ukrainian Catholic Church coming to Bolton.

"In fact, this is only going to be the second visit ever."

The only other trip by a leader of the Ukrainian Catholic Church to Bolton was made in 1970 by Archbishop Sviatoslav Shevchuk's predecessor Lubomyr Husar.

Mr Tymchyshyn continued: "There will be a high solemn Mass at Westminster Cathedral on Saturday, where there should be 70-75 bishops and 70 priests from all over Europe."

It is estimated 30,000 Ukrainians live currently in Great Britain, a significant number of whom belong to families who left Ukraine during the 1940s.

Mr Tymchyshyn said this weekend's commemorations come at a time when the Ukrainian community in northern England appears to be growing.

He explained: "We had a lull, whereby the numbers [of people] attending events, school and church did decrease but those numbers have now started to pick up again."

While Eastern Orthodox is the most popular branch of Christianity in Ukraine, one per cent of the population identifies as Catholic.