The Living Way Ministries Church in Opelika was criticised online after sharing a Facebook post of a sign that was put up outside its church which said "They falsely accused Jesus. Vote Roy Moore".

A church in Alabama encourages people to vote for Roy Moore. The church is a tax exempt organization, this is against the law. I filled out IRS Form 13909 and I am sending it with this picture. A copy of the form is below in this thread. Just add your name and mail with Pic. pic.twitter.com/G3Zz0RT9OB

Moore, 70, who is a Christian, has been accused of sexual misconduct with young girls but has denied the claims deeming them a conspiracy from "lesbians, gays, bisexuals and socialists".

The Church's politically sparked billboard may be in violation of Internal Revenue Service rules governing political speech by churches and charities.

One person posted: "Actually for those bible ignorant folks - Jesus was NOT falsely accused... He was guilty as charged and had planned from day one for the verdict and sentence to be what it was

"How dare you compare a politician to Jesus. Jesus was A-POLITICAL seeking to serve only a heavenly kingdom."

A church official told a Huntsville-based station WHNT-TV that a congregation member posted the message without telling the pastor, who had it removed two days later. 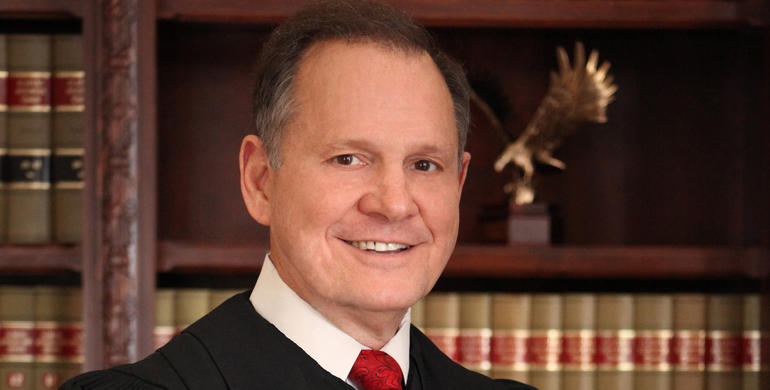 Moore is running in Alabama against Democrat Doug Jones on 12th December in a special election to fill the vacancy left by Jess Sessions who left to become Attorney General.