On 24th April 1915, close to a year into World War I, thousands of Armenians living in Constantinople (modern-day Istanbul) were rounded up and force-marched into detention by the Ottoman authorities. This gruesome episode proved to be the beginning of the Armenian genocide in which well over one million Armenians - one third of the Armenian population in Turkey at the time - had their lives brutally ended.

On 9th November 1938, the German Nazis smashed the windows of Jewish shops, burnt their synagogues and rounded up thousands of Jews who were then sent to concentration camps at Sobibor, Treblinka and Auschwitz / Birkenau. That grisly night, Kristallnacht, was only one incident in the history of the Jewish holocaust. Between 1933 and 1945, roughly two-thirds of the Jewish population also had their lives expunged brutally.

To my mind, one of the most spine-chilling expressions of the deadly vinculum between the Armenian genocide during WWI and the Jewish holocaust during WWII hangs today on the walls of the Holocaust Museum in Washington. A quote from Adolph Hitler in 1939 gloats, "Who today remembers the massacre of the Armenian people?" In the words of the late American philosopher George Santayana who once warned that those who forget history are condemned to repeat it, Hitler's remark was meant as a reassurance to his generals who felt somewhat uneasy about the international repercussions of the planned mass ethnocide of Jews in parts of Eastern Europe. His rhetorical question implied that the 'civilised' world would shrug off the mass killing of Jews, just as it had accepted the Armenian mass exterminations some twenty-three years earlier.

One reason why I started my reflections with two historical examples is that it transports me uneasily to a third more contemporary event in the UK that took place for the first time on 27 January 2001. Britain joined several other countries in remembering as Holocaust Memorial Day the anniversary of the liberation of Auschwitz by the Red Army in 1945. When the idea was first introduced, HM Government emphasised that it wanted such a Memorial Day to serve not just as a tribute to the six million Jews who perished under the Nazis but as a warning of what may still lie ahead if civilised nations do not address the racism that is rife in their midst. Hence, other crimes against humanity were included in the rubric - such as the mass slaughter of Tutsi, Twa, and moderate Hutu during the Rwandan Civil War in 1994. Controversially though, the Armenian Genocide of 1915 was left out. The then Prime Minister Tony Blair was taken to task for excluding the Armenians for fear of offending the Turkish government in Ankara. If this were true, such realpolitik appears to drive a coach and horses through the idealism without which the idea of a Memorial Day becomes hollow. Indeed, either such a red-letter day is something conscience and ethics demand universally, or it becomes a sanctimonious political gesture which could belittle the very suffering it is meant to commemorate across the world.

Looking at the issue from an academic viewpoint, wholesale massacres tend to evoke in peoples two sets of divergent reactions. Historians such as Irving (Yitz) Greenberg believe that such barbarities promote an ethic of survival whose inherent defensive psyche requires that the only way to ensure future survival - and thereby to avoid further massacres - is through the amassing of power. Conversely, theologians like Marc Ellis have postulated that atrocities of this scale engender an ethic of solidarity with all victims of oppression where the victims of one atrocity will stand in solidarity with others who are themselves the subjects of mass killings.

But how should an Armenian respond to this genocide after 105 long years? In the UK, for instance, the Armenian community, assisted by the Armenian Church as well as by representative organisations and individuals, have busily put together a series of virtual activities to commemorate this anniversary. In view of the Public Health England (PHE) guidance, a wreath-laying ceremony at the Cenotaph has been cancelled, and there will only be a virtual commemoration at St Yeghiché church in the heart of London. Similar events are being planned in Manchester, Wales and Dublin. A primary objective is of course to remember the martyrs who were canonised wholesale by the Armenian Apostolic Church on the centenary of this genocide in April 2015. But another equally valid objective is to remind other communities - families who lost kith and kin - that this genocide cannot be forgotten even in the midst of a death-importing pandemic. 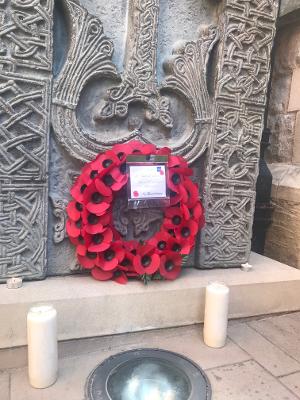 So to try and provide some sort of an answer to this question, let me start off with my own family who lost many of its members during the massacres that left a trail of countless skulls and bones leading up to the Deir el-Zor desert in Syria. My grandparents saw with their own eyes the killing and maiming of some of their family members. So should I be vengeful and demand a settling of accounts? Or is it time to conclude that both sides - Turks and Armenians alike - need to move beyond the unhealthy signs of triumphal point-scoring?

Hebrew scripture counsels us in such instances, "Do not let the wise boast in their wisdom, do not let the mighty boast in their might, do not let the wealthy boast in their wealth; but let those who boast ... know ... that I act with steadfast love, justice and righteousness in the earth ..." (Jr 9:23 -24). I recall an article in the Israeli English language daily Jerusalem Post entitled 'Revisiting History' which read, "... being self-critical [is] an acceptance that no one side has the monopoly over the historic truth, because there is no such thing" [as one historical truth]. The article added that "the historical narratives of the 'other' groups' ought to be heard too."

Armenians and Turks have for long been caught up in a vortex of mutual recrimination and [even] the occasional guilt transference. It is high time they explore the virtue of forgiveness - which is not synonymous with forgetfulness. However, as any practitioner in conflict resolution knows full well, this would implicitly require a bold acknowledgement by Turkey that a genocidal crime was committed by its predecessor regime against a largely defenceless people. After all, no justification or allegation offered to 'give a political or military interpretation' for the massacres can obviate the incontrovertible fact that a wrong was committed and resulted in countless deaths. Or else, where did all those Armenians living in Ottoman Turkey prior to 1915 suddenly disappear to? I would argue that such an acknowledgement would facilitate the redemptive process of forgiveness which alone can ultimately help both parties move beyond the memory.

But is Turkey today ready to take this leap of faith? I once had hoped that President Recep Tayyip Erdo?an would be the man to do it, not least because of his strong political base and his equally strong Muslim faith. But no more. And besides, are Armenians willing to respond to it? Or will the pride of Turks and the pain of Armenians collide in denying both sides the ability to inch forward? Today, as much of the world comes together to fight the COVID-19 pandemic, is it perhaps possible to imagine Turks and Armenians putting their differences away and starting to heal this longstanding and prurient wound that festers both societies?

On the evening of 24 April 2020, and as an Armenian Christian, I shall simply light a votive candle and place it on the windowsill in my flat. My message will not be one of defiance or bitterness. It will not even be an exhibition of pain. It will only pay homage to my relatives who died in 1915 and also try to reach out to those righteous Turks who helped Armenians during the genocide let alone to those who are my friends today.

A small candle with its flame flickering tremulously? Indeed, it is by far better than total darkness.

Dr Harry Hagopian is an International lawyer (with special interest in Alternative Conflict Resolution) & Ecumenical consultant to many churches. He is the author of "The Armenian Church in the Holy Land" (Russell Press, 2017) and collaborates with Premier Christian Radio. His website is www.epektasis.net