Christians have been paying tribute to the Northern Ireland peacemaker Martin McGuinness, who's died at the age of 66.

Martin McGuinness was one of the IRA terrorist organisation's most senior leaders during some of Northern Ireland's darkest times including Bloody Sunday in 1972, when 14 Republican protestors were killed by police.

He also served two prison sentences for his roles in the IRA. He then says he left the organisation in the mid-1970s, though this is disputed, before becoming central in uniting Republicans and Unionists - ultimately culminating in the 1998 Good Friday Agreement and power-sharing executive government.

The most senior Catholic in Ireland, Archbishop Eamon Martin, said Mr McGuinness was "courageous" to championing politics and persuasion.

Archbishop Eamon said: "He channelled his many gifts into creating and sustaining the peace process of which he was one of the key architects.

"I have no doubt that Martin's faith and relationship with God guided him along this journey. He was a man of prayer and I am personally grateful for his good wishes and encouragement to me, as a fellow Derry man, in my own vocation.

"The story of conflict in Ireland has brought much pain and trauma and I thank God that in recent years we have preferred peace to the horror of violence and war."

McGuinness was Deputy First Minister of Northern Ireland for Sinn Fein for nine years, spanning from 2007 to 2017. He resigned from the role and as leader of Sinn Fein earlier this year, partly in protest over how the Unionist DUP handled a failed renewable energy scheme which went millions of pounds over budget, but also because of ill health.

The resignation triggered a snap election in Northern Ireland earlier this month where Sinn Fein put in its best ever electoral showing.

Christian MP and leader of the Alliance Party of Northern Ireland, Naomi Long, told Premier not everyone will be celebrating his political achievements today.

She said: "There will be families in Northern Ireland and further afield who will be still grieving the loss of victims of the IRA campaign and who will find listening to, if you like, the positive commentary on Martin McGuiness's life quite a painful experience.

"We have to acknowledge that and be sensitive to it."

Naomi Long went on to say the political achievements of Martin McGuiness are clear, adding: "We can see that we would not be where we are today if it were not for people like Martin McGuiness who came from very entrenched positions and managed to, in some shape or form, to bring about a kind of reconciliation in Northern Ireland, [though] it is imperfect and incomplete."

The statesman also identified as a Christian, telling Premier previously in an exclusive interview: "I believe that something created this beautiful planet, it's just so extraordinary in the universe that I can come to no other conclusion. 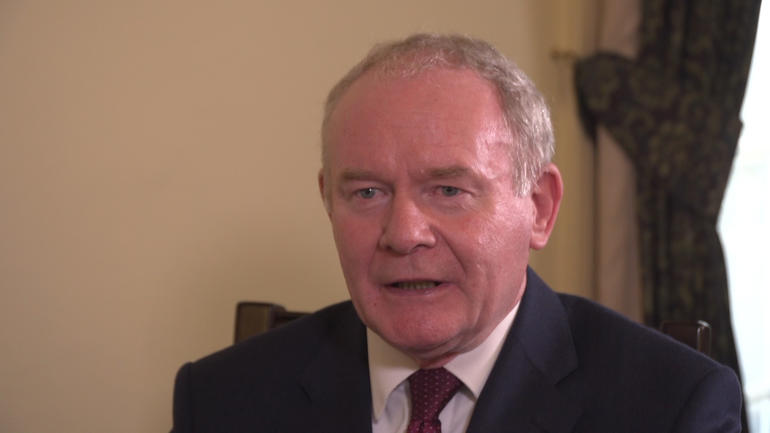 "But I also am influenced by Jesus Christ, he was someone who, if the history books are as accurate as people claim them to be, was someone who was very special.

He also said his faith was important in finding "common ground" with unionist leader Rev Ian Paisley during the peace process.

A video of Premier's interview, which also includes an interview with DUP leader and Christian Arlene Foster, is below.

Martin McGuinness had a rare ability to move beyond his chequered past and make former enemies his friends. My prayers are with his family

Peter Lynas, from the Evangelical Alliance in Northern Ireland, told Premier the peace process there couldn't have happened without Martin McGuinness.

He said: "People like him, because of their past, were better placed to remind others that violence doesn't work, and needed to continue to send that message when there were some fringe elements within Republicanism continuing to try that route. And so I think he was a very important figure.

"Part of his past, while it's very difficult and very problematic, at the same time that enabled him to come on the [peace process] journey, and he and [DUP leader] Ian Paisley formed an incredible relationship that brought Northern Ireland through one of its most difficult periods, and enabled us to move forward."

Sammy Wilson, a Christian and the Democratic Unionist Party's MP for East Antrim told Premier: "For some people in Northern Ireland, he'll simply be remember as someone who brought them great pain.

"For others, he'll be remembered as someone who aided and abeted in bringing some kind of political normality to Northern Ireland.

"Different people will judge him in a different way and he is now, of course, going to meet the ultimate judge [God], who will require him to give an account of himself and the things which he did."

Rt Rev Kenneth Kearon the Bishop of Limerick for the Church in Ireland told Premier Mr McGuiness went on to help Northern Ireland move towards peace.

He said: "Martin McGuiness was one of the people who led that trajectory of change and I think we have to admire him for that but his passing will be complex.

Bishop Kenneth also said: "There's no doubt that he was certainly associated with those involved in a lot with serious violence in Northern Ireland, that was one Martin.

"I think, then, the second Martin really is this politician Martin McGuiness who, as the peace process evolved, stepped up and became a very effective leader."

Chief executive of the Church Army, Mark Russell, who grew up in Northern Ireland, told Premier he saw a signifcant change in Martin McGuiness.

He said: "The journey he has been on from defender of violence, from someone who believed in the Armelite - to someone who is a democrat, who's fighting for peace and wanted to build a different Northern Ireland is just remarkable.

"History will record different stories from Martin McGuiness's life but, without question, the last of those stories is one of remarkable change... where his former enemies became his friends and where he took huge personal steps and huge personal risks to make Northern Ireland a safer, safer place."

Listen to Premier's Aaron James speaking with Peter Lynas from the Evangelical Alliance in Northern Ireland: