The Church of England has blasted the decision of the country's top cinema chains to reject an advert featuring The Lord's Prayer.

New website JustPray.uk, which is run by the Church, had wanted to show a 60 second advert of The Lord's Prayer before films across England.

Odeon, Cineworld and Vue, which control 80% of cinema screens around the country, have refused to show the advert because they believe it "carries the risk of upsetting, or offending, audiences".

The Church had produced an advert promoting the new website to be shown in cinemas from December 18 2015 as part of the ad reel before Star Wars: The Force Awakens.

It's branded the decision "plain silly" and says it has a "chilling effect" on free speech and is considering taking legal action under the Equality Act which bans commercial organisations from refusing services on religious grounds.

The Bishop of Chelmsford told Premier the Church had been told the advert would be fine and was even offered a discount on the fee.

"The cinemas really at the last minute for some reason best known to themselves got cold feet," said Rt Revd Stephen Cottrell.

Christians from many walks of life, including a weight lifter, a police officer, a commuter, refugees in a support centre, school children, a mourner at a graveside, a festival goer and the Archbishop of Canterbury, are all shown in the advert.

Archbishop of Canterbury Justin Welby said: "I find it extraordinary that cinemas rule that it is inappropriate for an advert on prayer to be shown in the week before Christmas when we celebrate the birth of Jesus Christ.

"Billions of people across the world pray this prayer on a daily basis. I think they would be astonished and deeply saddened by this decision, especially in the light of the terrorist attack in Paris where many people have found comfort and solace in prayer.

"This advert is about as "offensive" as a carol service or church service on Christmas Day. As a church we are a Jesus movement and this is the prayer which Jesus taught his disciples.

"I think people need to watch the film and come to their own conclusions as to whether it is offensive or upsetting. Let the public judge for themselves rather than be censored or dictated to." 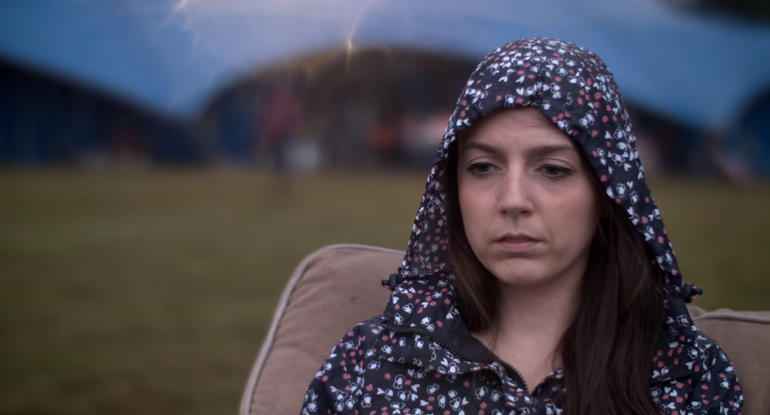 A screen shot from the advert

Jonathan Oloyede, the convenor of the National Day of Prayer, told Premier it was an "incredible" decision.

He said: "I have no idea why anybody would say it is offensive, that has to be challenged.

"I think the Church of England should look at the options of even legally challenging the advertising standards."

Revd Arun Arora, Director of Communications for the Church of England, said: "The prospect of a multi-generational cultural event offered by the release of "Star Wars: The Force Awakens" on 18 December - a week before Christmas Day - was too good an opportunity to miss and we are bewildered by the decision of the cinemas.

"The Lord's Prayer is prayed by billions of people across the globe every day and in this country has been part of everyday life for centuries. Prayer permeates every aspect of our culture from pop songs and requiems to daily assemblies and national commemorations. For millions of people in the United Kingdom, prayer is a constant part of their lives whether as part thanksgiving and praise, or as a companion through their darkest hours.

"In one way the decision of the cinemas is just plain silly but the fact that they have insisted upon it makes it rather chilling in terms of limiting free speech. There is still time for the cinemas to change their mind and we would certainly welcome that.

"In the meantime people should visit the site, see the film themselves and make up their own minds as to whether they are upset or offended by it." Digital Cinema Media, the agency which handles British film advertising for all of the chains involved, was not contactable by Premier.

But its website does state adverts "must not in the reasonable opinion of DCM constitute Political or Religious Advertising".

Terry Sanderson, the president of the National Secular Society, said: "The Church of England is arrogant to imagine it has an automatic right to foist its opinions upon a captive audience who have paid good money for a completely different experience.

"The Church does not hesitate to ban things that it deems inappropriate from its own church halls - things like yoga. The cinema chains are simply exercising the same right."