Most Rev Eamon Martin, Archbishop of Ireland was speaking during Mass on Sunday.

"Migrant smuggling and human trafficking feeds on the desperation of vulnerable people, many of whom are fleeing from violence or economic uncertainty," he said.

"Smugglers and traffickers exploit children, women and men who are prepared to use drastic measures to reach what they think and hope will be a better life, often only to be enslaved and manipulated in forced labour or prostitution.

"The horror of this discovery should awaken us all to the reality that human trafficking could be happening right in front of us - in our own parish and in our own town.

"Let us resolve to raise awareness, to keep our eyes open and to cooperate at all levels of society for an end to this evil in our midst."

Police found the bodies of 8 women and 31 men in the refrigerated trailer of a lorry on an industrial estate in Grays, Essex, in the early hours of Wednesday. 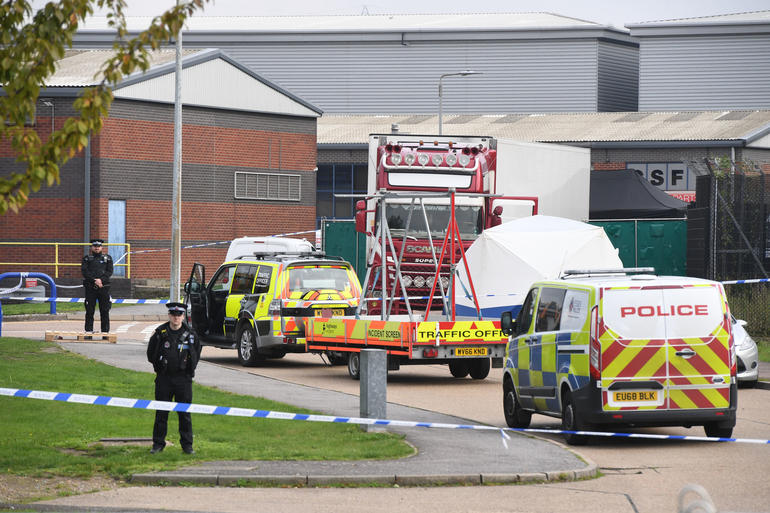 The lorry driver, 25-year-old Maurice "Mo" Robinson, from Northern Ireland, is due to appear in court on Monday charged with 39 counts of manslaughter, conspiracy to traffic people, conspiracy to assist unlawful immigration and money laundering.

Three other people arrested in connection with the deaths have been released on bail, Essex Police said on Sunday.

It was revealed on Monday that the family of a young Vietnamese woman thought to be among the migrants found dead said she dismissed their pleas not to travel.

Pham Tra My, 26, has not been in contact with her family since sending a final text message home on Tuesday saying she could not breathe.

Relatives of Ms Tra My told the BBC they have not been able to contact her since she sent a text on Tuesday night saying she was suffocating.

"I am really, really sorry, Mum and Dad, my trip to a foreign land has failed," she wrote.

"I am dying, I can't breathe. I love you very much Mum and Dad. I am sorry, Mother."

Ms Tra My is reported to have paid a charge of about £30,000 to people smugglers in order to be brought into the UK illegally.

Her father, Pham Van Thin, told Sky News: "We tried to talk her out of it because it would be a very difficult journey for her as a girl.

"But she said: 'If I don't go, the family would stay in a very difficult situation because of the big debt'.

"So she took a risk and decided to go, and we had to agree."

He added: "We all have been in shock. I cannot explain our pain and devastating feeling. We were all very devastated and sad."

He told CNN that smugglers said the crossing was "a safe route" and that people would go by aeroplane or car.

"If I had known she would go by this route, I would not have let her go," the father said.

Archbishop Eamon also led prayers for those involved in the tragedy during the service at Saint Patrick & Saint Colman's Cathedral, Newry, Co Down.

"I encourage everyone to pray for those who have perished, for their loved ones, for all those caught up in this gruesome situation and for those who are called to respond," he said.

"Pray that the identities of the dead can be quickly established and that all those responsible be stopped and brought to justice."