Archbishop of Canterbury to vote to remain in EU

The Archbishop of Canterbury will vote to remain in the EU warning a Brexit would harm the poorest.

Britain, Most Revd Justin Welby said, should be a "country for the world".

He warned against "succumbing to our worst instincts" over immigration when the country goes to the polls on June 23 in the referendum on European Union membership.

Writing in the Mail on Sunday, he said had no "divine hotline" and that he expected to receive abuse for taking a position in the debate.

But he said "a vision of peace and reconciliation, of being builders of bridges, not barriers" was one of the principles at the heart of the country's Christian heritage.

"It is not said with the desire to tell others how to vote," he wrote.

"In no sense do I have some divine hotline to the right answer. We each have to make up our own minds.

"I hope and pray that the result will be reached with the aim of a good Britain in a good Europe, whether as part of the EU or not. I pray that each person's vote will be based on generosity, hope, confidence.

"I pray that we will then reunite with immense determination to be a gift to the world of today and to future generations." Archbishop Justin has already clashed with the UKIP leader Nigel Farage over what he says are his deliberate attempts to stir up racism - leading the politician to call him a "bad archbishop" who "turned a blind eye" to threats from migrants.

In his article, Archbishop Justin recognised the issue was "a major concern for very many people" that had to be addressed.

"But we must not succumb to our worst instincts. The language in the campaign has been very blunt, but this is the question of a generation, and merits passionate campaigning."

He insisted he had "huge respect for politicians on both sides as they seek to put their case, a case in which they genuinely believe, and which they know matters hugely".

The EU "needs renewed vision; major reforms", he conceded, but remained in part responsible for the maintenance of peace on the continent since 1945 which was "the greatest cause for thankfulness that we can imagine".

He said it "seems likely that the most probable economic effect of leaving would be negative in the short to medium term".

"Prosperity should not be the final aim for us, but the lack of it affects what we can do as a nation, how we are able to care for those in need here and elsewhere." 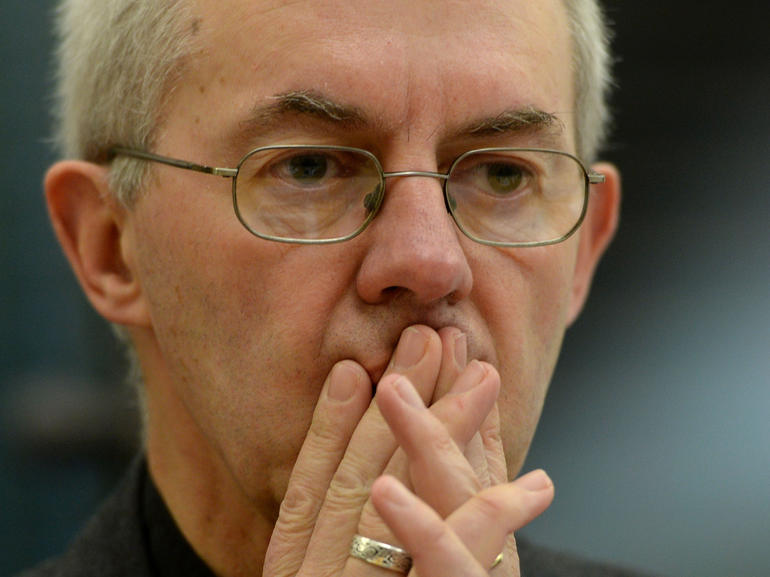 He added: "To be a country for the world is part of the calling of being British.

"Economics are massively important, so is migration, but they are not every-thing, although they are the signs of the values we have."

In an apparent swipe at efforts by both camps to draw on the inspiration of those who fought in the Second World War, he said "no-one can conscript them to one side or the other".

"How those who fought would vote in the referendum is unknowable, and likely to be as varied as how people today will vote," he argued.

In a plea for post-poll unity, he wrote: "There is no official Christian or Church line on which way to vote. Voting is a matter for each person's conscience.

"Two things are sure. Each of us should turn out and vote if we can. And after the referendum we must come together as one people to make the solution we choose work well.

"Hard words (and I expect even this article may cause me to receive those) must not create enduring bitterness. Those who have led both sides have done so with courage and determination."

My prayer is that we decide the #EUref with a sense of generosity and vision of what Britain can be in the world.https://t.co/J2utoE8jdV

Dr Adrian Hilton of Christians for Britain said: "Don't you just love the Church of England's concept of 'neutrality' in the matter of the EU Referendum?

"Justin Welby is keen to stress that the Church of England does not have an official line on the EU Referendum. It's just that it appears so.

"Imagine if the Government had declared itself to be neutral on the matter, and one by one the Cabinet had toured the TV studios to endorse 'Stronger In' while slagging off leading BeLeavers.

"Do you not think people might detect a hint of predisposition, if not a prejudiced and pre-ordained agenda?

"It is surely a façade of institutional neutrality which permits the full weight of its collective leadership not merely to express a 'personal view', but to dedicate its entire Church House and Lambeth Palace communications machinery (and so staff and financial resources) to ensure the effective dissemination of that message in the national and social media."