An article in Saturday's Daily Mail claims that Most Revd Justin Welby said sorry for 'bombing the Nazis'.

The newspaper report comes after the archbishop made a speech at a church service attended by German president Joachim Gauck. 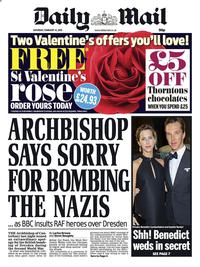 Reflecting on the events of 70 years ago which left 25,000 civilians dead and destroyed much of the city, Archbishop Justin said he felt "regret and deep sorrow".

He said: "Seventy years ago our nations and peoples were at war. Over three days in February Allied bombers brought death and destruction on a scale and with a ferocity it is impossible to imagine. In the rage of war our hearts inevitably harden and increasingly brutal and devastating force is unleashed.

"Walking together as friends requires talking together in truth. As Croatian theologian Miroslav Volf challenges us, 'To remember wrongdoing untruthfully is to act unjustly'.

"Much debate surrounds this most controversial raid of the Allied bombing campaign. Whatever the arguments, events here 70 years ago left a deep wound and diminished all our humanity. So as a follower of Jesus I stand here among you with a profound feeling of regret and deep sorrow."

After the service, he was asked whether Britain and America should apologise in an interview with BBC 5 Live.

It was a 'very complicated question' he replied and added that Brits had suffered greatly in German bombings too.

"I think there is a deep need for profound sorrow at the events and the causes of such dreadful times as Europe lived through," he added.

But his official spokesman has called the media report that he apologised "manifestly false".

"The Archbishop's comments were a reflection in a solemn ceremony on the tragedy of war.

"They very carefully avoided apologising, and those present, including the president of Germany, recognised the difference.

"In his speech the president also recognised the fact that there is no equivalence with Nazi war crimes and that the war started with Nazi aggression.

"In broadcast interviews immediately following his speech the Archbishop refused to say he was apologising, but repeated that war is always tragedy. He also referred to the terrible losses in Bomber Command.

"Archbishop Welby said it was not a question of blame and spoke of the bombing of Coventry, Liverpool, London and other places."