Rev Phillip Owen said the robbers got away with almost £55,000 of gems in May which he was going to give to his grandchildren.

"It was a big day but it was absolutely ruined," Rev Owen said, referring to his birthday.

"My grandchildren came down and were traumatised with the mess that was here and the state their grandmother was in.

"The dog was badly beaten. It was terrible."

Keiran Bunce, 19 and Marcus Thomas, 30, admitted the charges and got two years and eight months and four years and six months.

Leon Rowlands, 20, was found guilty after trial and given 18 months. 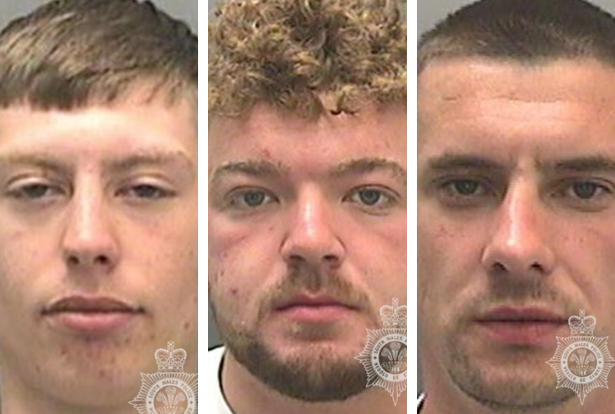 Rev Owen said the burglars took glass they had smashed from a window to get in the house; put it in meat they had got from his fridge and then fed it to his dog, Rusty.

The vicar also said the dog was beaten on the back of his legs and ribs and was left limping. Thankfully, a vet confirmed the dog didn't ingest any of the glass and has now fully recovered from the attack.

Rev Owen, from Taibach, Neath Port Talbot, said the men had started raiding the house, but when they found a safe, they focused on that.

He said one piece of jewellery was 100 years old and most of them are extremely rare.

"The stones were more valuable than the gold of the rings," the vicar said.

Rev Owen said the sentimental value of the jewellery meant more him than the money, adding that he felt he had let his family down but allowing them to be stolen.

"The memories are gone," he said.

Only a small fraction of the jewellery has been found, around £13,000 worth.

The Judge Geraint Thomas described Thomas a "career criminal" and urged the men to show their sorry by revealing where the stolen jewellery was. However, they refused.

A digital camera and two pages of a sermon Rev Owen was supposed to deliver that weekend at Fabian's Bay Congregational Church in Swansea, were also stolen.