Liberal Democrat leader Tim Farron has come under fire once again over his views on homosexuality but this time for refusing to answer if gay sex is a sin.

The Lib Dem leader was asked by ITV's Robert Peston on Sunday to clarify his position on gay sex after The Observer reported he failed to fully answer questions about it when asked previously.

On the Peston On Sunday show, Farron insisted that he had been clear that "being gay is not a sin" and said: "It's possible that I'm not the only person who's getting tired of this line of questioning."

It comes a week after Farron's comments on homosexuality sparked strong criticism from a number of politicians and commentators. 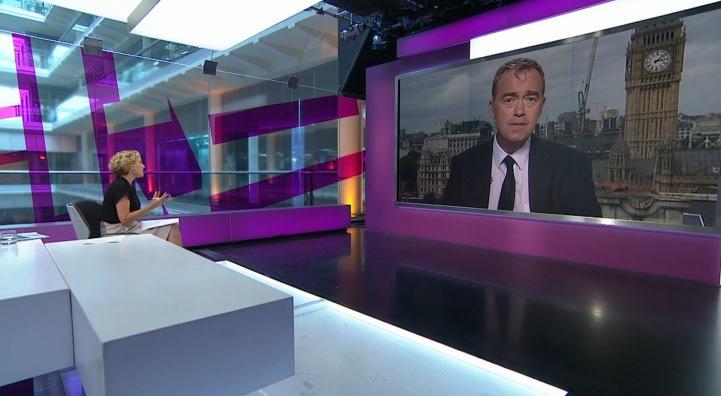 Farron refused to answer Channel 4's Cathy Newman's question of whether he thought homosexuality was a sin but he later replied in the Commons to openly gay Tory MP Nigel Evans saying "I do not."

Asked yesterday by Peston about the claims he failed to give his view on gay sex, Farron said: "In America, it appears that you have to invent a faith in order to be seen to be a serious candidate for anything. And in this country, maybe it appears you have to pretend you haven't got one to be taken seriously. Can I just point out - possibly even slightly impatiently, that both of those stand-points are utterly ludicrous. Shall we talk about things that might impact on the election?"

His comments have raised fresh criticism from a number of politicians and commentators, including Labour MP Liz Kendall and Conservative former cabinet minister Michael Gove, who were in the same studio listening to his answers.

Reacting to the interview, Kendall said on the programme: "I think a lot of people will be appalled that he couldn't bring himself to say that gay sex is not a sin.

"I think that's pretty offensive and will rightly anger a lot of people."

Gove added: "It'd have been perfectly possible for him to say 'Of course it's not a sin, it's how people love each other'.

"I'm a churchgoer too. I don't have any problem in saying that I think gay sex is absolutely not a sin."

But some politicians have shown moral support to Farron in the wake of more accusations that he is homophobic.

Former deputy leader of the Liberal Democrats Sir Vince Cable defended the party's current leader and said: "The problem he has as an individual, and it's true of a lot of Evangelical Christians and Roman Catholics, is that their faith has a certain approach to these problems.

"They're also public figures who have to represent their constituencies, which are much more diverse.

"I think Tim accepts that he's got to reflect the people they represent and he's done so in a very liberal way."