In an interview published in a Salvation Army publication in 2007, Farron spoke about his Christian belief and said: "Take the issue of abortion.

"Personally I wish I could argue it away. Abortion is wrong.

"Society has to climb down from the position that says there is nothing objectionable about abortion before a certain time.

"If abortion is wrong, it is wrong anytime."

It comes after Farron became embroiled in controversy over his views over whether gay sex is a sin.

His party have also denied claims that their leader is pro-life.

The party's election spokesman Sir Ed Davey said on BBC Radio 4's Today programme that Farron had made it clear he is pro-choice.

Asked whether the party would ban abortion, Sir Ed, who is standing in his former Kingston and Surbiton seat, said: "No. Tim has made very clear he has changed his mind.

"He's made it clear that he is pro-choice and the Liberal Democrats believe that women should have the right to choose."

A copy of the Salvation Army's February 2007 issue of War Cry according to the Guardian was held in the Bodleian library and includes Farron's interview across two pages.

He argued in the publication that he was against abortion being "abolished tomorrow".

Farron said: "Women would still want abortions and they'd have them illegally. So a complete ban on abortion would not achieve what I want.

"The reality is that abortion is too widely available.

"There needs to be tighter restrictions. The challenge to Christians is to come up with realistic alternative strategies." 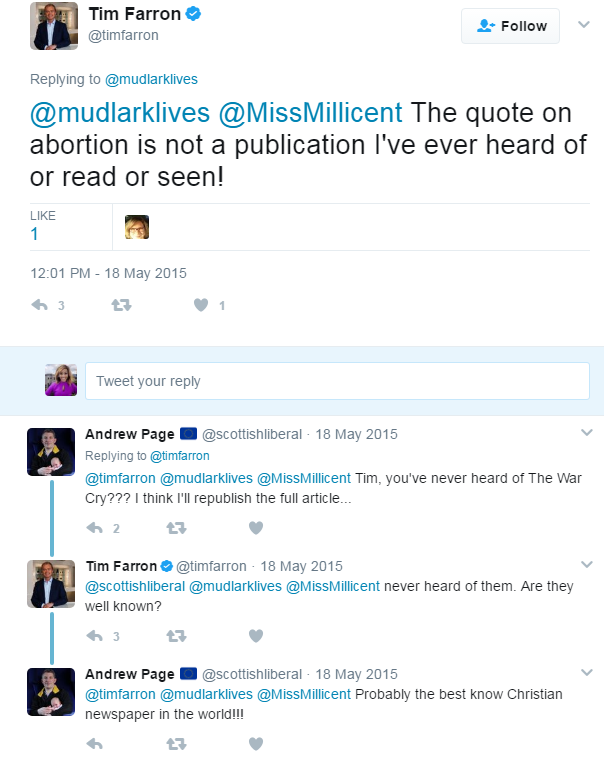 However, when he was asked a few years ago about his 2007 comments, he responded on Twitter claiming: "The quote on abortion is not a publication I've ever heard of or read or seen!"

Farron was quizzed again on whether he thought abortion was wrong during an ITV interview last week. He said that he strongly believed that "when procedures take place, it should be safe and it should be legal.

He declined to give his personal view and instead said: "Again, what one believes in one's personal private faith is just that."