Dundee Foodbank, which is affiliated to the Christian charity, said the position was only available to "a committed Christian and church member".

He said: "If the Scottish Secular Society object to Christians running food banks they are perfectly free to start one of their own.

"But this of course they refuse to do preferring instead to go to the media and complain.

"This seems to be the pattern - Christians set up a trust to feed the poor in accordance with what our faith instructs us to do, and the militant secularists attack the Christians for daring to express our faith in this practical way.

"It is petty and vindictive and indicates precisely the difference between the Christian churches, who act upon their faith, and the secular faith, which spends all its time attacking others." 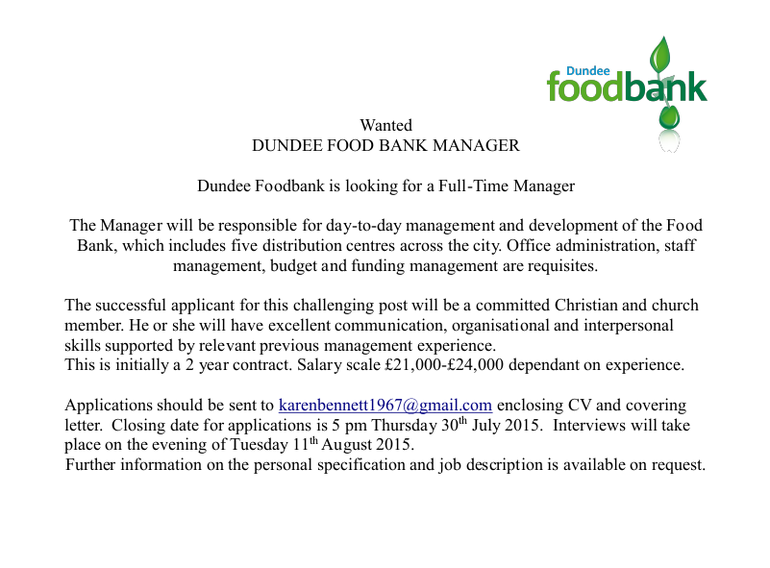 But the SSS Chair Spencer Fildes said it was "absurd to maintain that only Christians are concerned to feed the hungry".

He added: "This is in clear violation both of employment law and of Advertising Standards Authority (ASA) rules.

"I applaud the work of the Trussell Trust and as a political organisation (we are not a charity), we have never attacked the work that they do.

"We have members who help with foodbanks. I give 10% of my wages to charities. We are not the ghouls Robertson is trying to make us out to be and he should cease misrepresenting us. The press contacted us about this; not the other way round.

"In view of the important work of the food banks in supplying emergency assistance to some of those left destitute by current Government policies, the Scottish Secular Society have decided not to make any kind of formal complaint.

"However, the Society is appealing to foodbank's own good judgement to resolve this matter and hope that the Trussell Trust will reconsider its position.

Citizens Advice says it is against the law to only offer jobs to a specific faith group, but it is acceptable to suggest that applicants belong to a certain religion if it will be an important part of the job.

However, in some cases, if an organisation can prove it is a necessity that the job holder be of one particular faith, it can be deemed legal.