Over 45,000 people have signed a petition, which has been given to the government asking ministers to protect freedom of speech for preachers in the UK who aren

The petition was sparked by the treatment of Pastor Olu Ilesanmi, who was arrested in February for street preaching and had his Bible taken off him but was later 'de-arrested'.

Last week, he was awarded £2,500 from the Metropolitan Police for wrongful arrest.

On Tuesday, Christian Concern, accompanied by Pastor Olu and other street preachers, took a yellow box of signatories to the Home Office in London, calling on the new Home Secretary Priti Patel to urgently investigate what guidance and training is being given to police officers and ensure that they protect the freedom to preach in public. 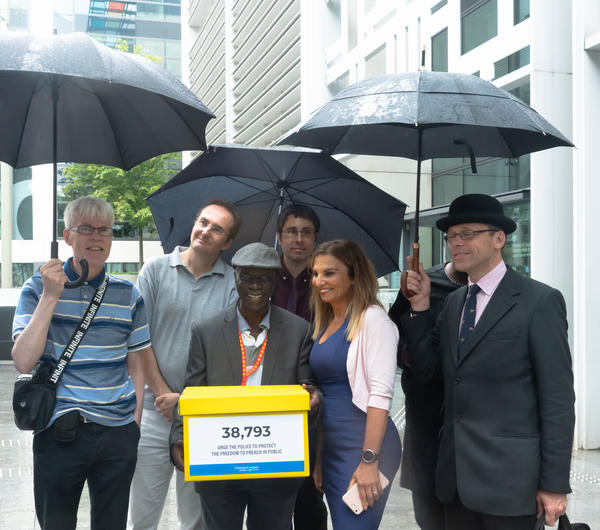 Many Christians are worried that the police are not being given enough training on what is legal to say, despite being unpopular, such as saying that Jesus is the only way to heaven or calling out certain sin.

Currently, there is freedom of speech in the UK as long as the law is not being broken by, for example, inciting violence or hatred of a particular group.

Freedom of expression is also protected in Article 10 of the Human Rights Act, subject to conditions such as the prevention of crime or disorder.

Other UK laws outlaw hate speech, such as Section 4 of the Public Order Act 1986, which limits offensive or abusive behaviour and now includes incidents where words or behaviour have invited racial or religious hatred or hatred on the grounds of sexual orientation.