The bells at St Paul's Cathedral will ring out for four hours later to mark the birth of Princess Charlotte of Cambridge.

It is a full peal of bells by 12 ringers who will take to the bell tower at 5pm.

If successful, the peal will involve about four hours of continuous ringing, with no breaks allowed. 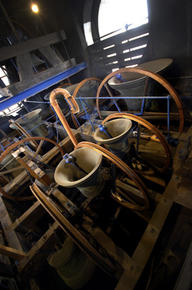 Any significant mistake would mean the attempt will be unsuccessful and not recorded as a full peal.

In 2013 the Cathedral tried to do the same in honour of the new-born Prince, George, but failed after being forced to evacuate the building three hours in.

Dave Bassford, Secretary of the St Paul's Cathedral Guild of Ringers, said: "Like much of the rest of the country, London's bell ringers were waiting eagerly for news of the Royal birth.

"Organising and ringing full peals is not a trivial task under any circumstances, especially at St Paul's where the largest of the 12 bells weighs over three tons.

"But add to that the uncertainly of the timing and things are even more complicated - we've had ringers on stand-by all over Southern England for a few weeks now.

"We're especially excited as this will be the first St Paul's peal attempt for a number of our ringers."

Princess Charlotte Elizabeth Diana was born at 8.34am on Saturday morning.