A senior Sinn Fein politician has revealed a notorious paedophile priest physically abused him when he was a schoolboy and tried to sexually groom him.

Conor Murphy has recounted how the late Malachy Finnegan dragged him into an office and savagely beat him with a stick before asking a series of explicit questions, including whether he loved him.

In an exclusive interview with the Press Association, Mr Murphy outlined his experiences in the late 1970s at the hands of Finnegan at St Colman's College in Newry, Co Down.

Mr Murphy, who attended St Colman's from 1975 to 1980, said he was angry that no one in authority stopped Finnegan's reign of abuse, despite his sexual interest in young boys being common knowledge within the school.

He has demanded a full investigation.

The high-profile politician is the latest former pupil of St Colman's to reveal their treatment at the hands of the abusive and sadistic cleric, whom he described as a "violent, volatile, bullying drunkard".

"I think it was just before the end of our third year, I was a 14-year-old, and there was a bit of ruckus going on in the class we were in and Finnegan burst into the room," the Newry and Armagh Assembly member told PA.

"He singled me out, he dragged me out by the hair, by the crown of your head, dragged me along the corridor, up two flights of stairs into his room and then he beat me with a stick on the hands and about the body.

"He was always prone to more violence than was perhaps to do with discipline.

"I can't remember my responses but I wasn't shocked by the conversation, because I had been forewarned by other pupils that this was what was likely to happen."

Finnegan worked in the school from 1967 to 1987. He has also been accused of abusing children in later years during his time as a priest for the Clonduff parish in Hilltown, Co Down. He died in 2002. The full extent of his crimes has only emerged in recent months.

Mr Murphy said his experience "paled into insignificance" compared to those men who have come forward to say they were sexually abused by Finnegan. 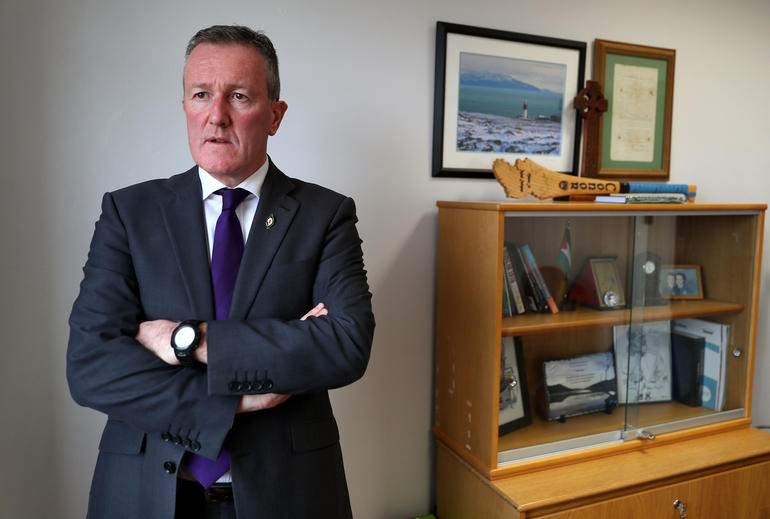 He said he was going public with his story to reassure others that they would be believed if they wanted to break their silence.

The Sinn Fein MLA said while at the time he was not aware that Finnegan was sexually abusing fellow pupils, everyone in the school knew about the explicit conversations he would try to instigate.

"We knew it was wrong, it was inappropriate, that it was not natural for a man, particularly a priest, to behave in that fashion," he said.

"But we knew quite a few pupils had gone through it. We didn't know that he had sexually abused boys but we knew and understood that he had an unhealthy interest and the way you approached that conversation was to shut down and try to get out of that office as quickly as you could."

He said Finnegan's violence was not about simply disciplining pupils.

"His was different, his was a violent attack, he would assault people," he said.

"It was also evident to me that he was drinking very heavily. I was only a kid but I had worked in a bar from when I was 12 years old and I knew. He would appear in the corridor in the mornings with his shoe laces undone, his vest hanging out underneath his shirt, the eyes bloodshot and quite aggressive.

"He would launch an attack if someone was coming up the corridor with their tie not straight they were liable to get thumped in the face for it. That was going on as a matter of course through my time there."

He added: "As time went on students themselves got to know that he had an unhealthy interest in young boys and that if you were in the room alone with him that he was liable to ask you very inappropriate questions and display an inordinate interest in your sexual development as a child.

With the knowledge so widespread among the boys in the school, Mr Murphy has asked why no one in authority intervened.

He said the Catholic Church, the school authorities and the wider education authorities all had questions to answer.

"They left him to abuse people without any interference probably across two generations of boys," he said.

"I am angry that a man who was a violent, aggressive bully, a drunkard with an unhealthy interest in children, and that was obvious, was allowed to be a principal of a school, was allowed to be teacher in a school over a long number of years, allowed access to young boys.

"And bear in mind a lot of boys boarded in that school as well, it wasn't just the day pupils. He had opportunity and access to people in the evenings who stayed and lived in the school."

Mr Murphy, who has made a statement to lawyers representing victims of Finnegan's abuse, said he hoped his story would help to validate the accounts of others who have come forward.

"I hope me speaking publicly maybe gives some people confidence to come forward, and that's the purpose of me speaking.

"It's not to draw any degree of sympathy for myself but it's actually to encourage others and to say that we believe those who say they were sexually abused, we know the pattern in the school."

The Catholic Church has described Finnegan's abuse as "abhorrent" while St Colman's College has said it condemns in the "strongest possible terms the physical, sexual and emotional abuse inflicted by Malachy Finnegan".

In a further statement, the board of governors at St Colman's College said: "The board unreservedly condemns all abuse and advises that anyone who is a victim to contact the PSNI.

"The school is co-operating fully with a PSNI investigation regarding historic abuse.

"This is the most suitable mechanism to address these issues. Until such investigations are complete the board will not be making further public statements."