Pagan group asks Archbishop to give back 'stolen' churches

According to the Sunday Telegraph, The Odinist Fellowship wants restitution and an apology for the persecution of its religion more than a thousand years ago.

According to the paper, the group asked Justin Welby to re-establish a better relationship with the Odinist Fellowship and Christian churches in England. It said an apology for past "crimes against the Odinists" and "restitution of past wrongs" is the best way to move forward.

Ralph Harrison, director of the Fellowship, told the paper: "Two bishops have sent responses, which have been polite, but nothing substantial.

"The objective is just to get the Church to acknowledge that it has got a history of persecution when it comes to the Odinist religion and it has to take stock of that and not just write it out of history.

"Within the Odinist community there is a strong sense of antagonism towards the institutional Church."

In an act that Harrsion described as "spiritual genocide", the group claimed that early church leaders took hold of temple grounds and turned them into churches during the Christiansation of England starting as early as the 7th century.

According to the Odinist Fellowship website Odinism is an ancient "indigenous form of heathen religion" practises by the Angles, Saxons and Jutes. 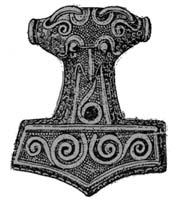 Dr James Palmer, a historian of early medieval Europe at the University of St Andrews, told The Sunday Telegraph the Odinist's claims that Christians stole churches from them can't be substantiated.

He explained that the belief stems partly from "letters sent by Pope Gregory in which he encouraged his missionaries to change existing temples into Christian places of worship in the hope that natives would continue to attend and be converted that way".

He told The Sunday Telegraph: "It's all very nice of the Odinists to say that the English were there and they're pagans, but actually the British were there too, and they were Christians."

"They've only been ancestral lands for at best 100 years before the pagans turn up, and it is most likely that any pagan temples were on old church sites.

"I think it's all a bit of tit for tat. If you can claim that the church took the land off the pagans, they had taken it off Christians to start with."

According to the paper, The Church of England has declined to comment.