No.10 thanks Christian domestic abuse charity for their work

The Christian charity Restored Relationships have received a letter from Downing Street, acknowledging the help they give women.

Restored is made up of an alliance of churches who work with Christians to end violence against women in the UK.

In July, the charity wrote to the new Prime Minister asking that: "priority is given to the Domestic Abuse Bill and parliamentary time is scheduled for debate. We would also ask for the inclusion of faith groups in the response to the bill as the consultation response is mostly faith blind.

"With a church or place of faith in nearly every community across the UK, who can shape attitudes and behaviours, we would urge you to see that faith is included in the response to domestic abuse and can be part of the solution for victims and survivors."

In response, the charity has received a letter from Jonathan Hellewell, the Special Adviser for Civil Society at No. 10 Downing Street.

He wrote: "The Prime Minister shares your concern about domestic abuse and is a strong supporter of the Domestic Abuse Bill" and that the government would like to see more support for women who struggle to tell people about their abuse.

Mr Hellewell added thanks to: "everyone in the Restored charity, for everything you do to support the victims of domestic abuse. Recovering from such crimes often takes a community-wide effort and the Government welcomes your help in this area." 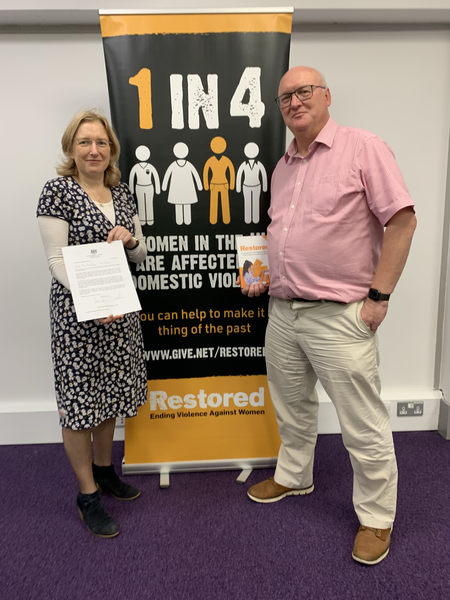 Mandy Marshall, co-director at Restored, told Premier the election could put a spanner in the works: "Obviously now with the dissolution of Parliament, what we want is for people to ask their candidates at their doorstep to ensure that the domestic abuse bill is reintroduced in Parliament in the next session.

"We want all candidates and all parties to make that commitment so that the good work that has gone on on this bill so far is not dropped. It was the first vote in Parliament that PM Boris Johnson won, there was cross-party support for this bill so we want that cross-party support going forward and to ensure that this bill is passed and especially support for survivors is given and is targeted and is fully funded so that it's not the postcode lottery that we have now."

Restored are encouraging Christians to write to their MP to support the passage of the bill, which passed its second reading on 2nd October and moved to the committee phase.