India's Prime Minister is being accused of failing to keep a promise to protect Christians from extremists.

In February Narendra Modi pledged: "My government will not allow any religious group, belonging to the majority or the minority, to incite hatred against others, overtly or covertly. My government will act strongly in this regard."

One of the country's most respected Cardinals said Mr Modi had not lived up to his word following a number of attacks on Churches and Christians.

Cardinal Telesphore Toppo said there was an urgent need for the government to take action in the face of rising attacks by Hindu radicals. 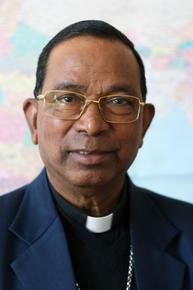 "They [the government] have not come out to protect and defend [Christians]," he said.

"The Prime Minister has only once spoken in defence of the constitution and he promised to protect the Christians and other minorities. But that was only a promise."

India's constitution does guarantee protection for Christians and other religious minorities but campaigners say believers continue to remain targets of religious discrimination by Hindu extremists and are offered little protection by the government.

The Cardinal was asked by charity Aid to the Church in Need if he thought the Prime Minister had kept his promise to protect minorities.

He replied: "No. Only openly has he spoken in Delhi.

"Then he said he stands by the constitution and that he would uphold the rights of the minorities."