Government pleads with Church to back Sunday trading

Currently shops in England and Wales with over 280 sq m (3,000 sq ft) floorspace are limited to opening for six hours on Sundays.

Ministers want to give councils the choice on their own local laws which they say would be worth up to £1.4 billion a year to the economy while ensuring high streets remain the "heartbeat of our communities".

Under the plans, set out in a Government consultation paper, authorities would have the discretion to decide whether to apply the new conditions throughout the whole of their area or limit them to specific zones where they want to encourage business. 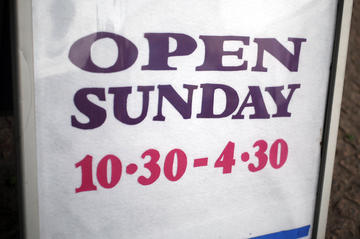 "We have already taken a range of measures to boost the Great British high street and now we are giving local areas another tool to encourage shoppers to the town centre and get shops to grow and thrive."

The Daily Telegraph said the minister would be writing to bishops to plead with them not to oppose the change.

He'll say: "The Government has been determined to revive our nation's high streets to ensure they remain the heartbeat of our communities for decades to come. High streets provide the social, cultural and essential services so many local people enjoy and rely on."

In his blog the Bishop of Leeds Nick Baines said: "This, once again, confirms that we have become a market society, driven by consumer economics, rather than a market economy, driven by the need for the economy to serve society. In other words, we now define our society in purely economic terms.

"The alternative would be to restrict Sunday trading rather than expand it. This would restore to society the notion of a common Sabbath and create space for common rest, the possibility for remembering who we are and why we are here. We are not born to shop.

"A losing battle, maybe; but one worth scrapping over for the sake of questioning what sort of a society we wish to be, rather than simply (and unquestioningly) accepting the society we have become."

The publication of the consultation paper comes after Chancellor George Osborne signalled the Government's intention to overhaul the existing law, which dates back to 1994, in last month's Budget.

However the proposals were strongly criticised by the shopworkers' union Usdaw, which argued the current system was working well and did not need to change.

"The Sunday Trading Act is a great British compromise, which has worked well for over 20 years and gives everyone a little bit of what they want," said union general secretary John Hannett.

"Retailers can trade, customers can shop, staff can work whilst Sunday remains a special day, different to other days, and shopworkers can spend some time with their family."

Stores in Scotland are free to open for as long as they wish on Sundays whilst in Northern Ireland they are restricted to just five hours.