Former asylum seeker ordained as a Church of Scotland minister

A former asylum seeker who escaped the clutches of Islamic extremists is being ordained as a Church of Scotland minister on Thursday.

Raheel Arif is being inducted into Denny Old Parish Church linked with Haggs Parish Church and will become its first full-time spiritual leader for five and a half years.

The 47-year-old said he was very excited about taking up this "wonderful and priceless ministry" in the Falkirk Council district.

Mr Arif and his wife Humaira and their children, Rhea and Roshaan, fled to Scotland from Pakistan in September 2011 after extremists threatened their lives because of their faith.

At the time, he was the vice-principal of a secondary school in Peshawar, partly run by the state, and the only Christian out of a staff of 52.

Mr Arif said a plot was mounted against him and his conspirators tried to have him arrested for blasphemy.

They were unsuccessful but a complaint led to him being demoted to his previous role as a biology teacher and his enemies then turned their attention to his family.

Mr Arif took his wife and children to Grangemouth to visit his cousin Rev Aftab Gohar, minister of Abbotsgrange Parish Church, in the summer of 2011 to lie low until things got back to normal.

But when they returned to Peshawar two months later it quickly became clear that his enemies would never leave them in peace so they decided to return to Scotland and seek asylum.

Mr Arif, who grew up in a Christian family and was very active in his local church in Pakistan and involved in mission work, said: "We were living a good life in Peshawar.

"We had a nice home and my wife and I both had good jobs but extremists kept threatening us.

"It was a terrifying, horrible situation and I was very scared.

"At first the threats were only directed at me and I thought things would calm down in time.

"But when people came to my house and threatened my family I knew that we had to leave.

"I had heard the stories of how non-Muslims were killed by extremists– butchered with their bodies put in sacks and thrown in fields."

Mr Arif said the family applied for asylum the day they arrived in Glasgow and 18 months later they were granted refugee status and leave to remain for five years which has been extended to indefinite leave to remain.

His first job was an assistant in a corner shop in Grangemouth followed by a position in a care home in Falkirk.

Mr Arif was encouraged by his family to consider applying for the ministry – a calling that originally spoke to him during a church visit to South Korea in 2001.

He enrolled in Highland Theological College in Dingwall in 2015 to study theology as a distance learning student and graduated last year. 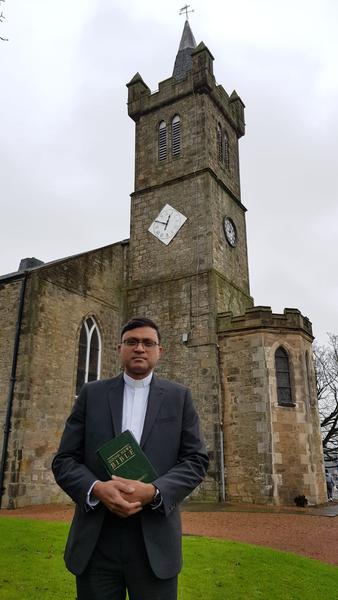 Mr Arif, who has a Masters degree in botany and a Bachelor's degree in education, carried out his 15 month probation at Zetland Parish Church in Grangemouth under the tutelage of Rev Alison Meikle.

"I have been on an amazing journey and my ordination is affirmation for that call and God's plan for my life," he said.

"When we came to Scotland the circumstances were very difficult but God's hand and grace was upon us which further increased my faith and trust in Him.

"Since the time I preached as sole nominee, I, along with my family have been overwhelmed by the welcome and love.

"I love both congregations and I hope and pray that we will walk together, laugh together and share tears together on this journey of faith under the umbrella of God's grace, love and mercy."

Mr Arif said he and his wife and son and daughter, who are aged ten and 16, love Scotland and have applied for British citizenship.

"It is a lovely country and it reminds me of my province in Pakistan because it is similar in terms of the landscape and the weather," he added.

Mr Arif, who became a Christian in 1990, said he was very thankful to the Church of Scotland for all the training conferences and support.

"Without it this journey would not be possible and I feel very confident that I have been put on the right track to follow my calling," he added.

"I am a very optimistic man and Christianity is the religion of hope so we have to do our best to reach out to people in our parishes and pray to God."

"I am excited and very proud of Raheel," she said.

"His ordination as a minister of the Church is a great occasion and a blessing from God."

Jim Thomson, session clerk at Denny Old Parish Church, said the congregation was looking forward to the dawn of a new era.

"Although we have been fortunate to have had good locum ministers and interim Moderators, the last five and a half years without a full-time minister has been difficult," he added.

"An awful lot of work has been pushed onto the congregation which, on one level, has been good because the church goes like a fair the whole week.

"The congregation is absolutely delighted and over the moon to be getting a young and energetic minister."