EXCLUSIVE: Franklin Graham on visit to UK: I'm not coming to preach hate

Evangelist Franklin Graham has hit back at MPs and others who've signed a petition calling for him to be banned from entering the UK.

He's been labelled a hate preacher ahead of his visit to Blackpool in September where he'll speak at the Lancashire Festival of Hope.

Previous comments he's made on homosexuality and Islam have led to some saying he shouldn't be given a platform in this country.

Speaking exclusively to Premier in an in-depth interview ahead of the event, he said: "I don't think I've been to any country where everybody was supportive - there's always churches or groups who don't like my theology or that we associate with this group or that group.

"I'm not coming to preach hate, I'm here to preach about a saviour - Jesus Christ who can make a difference in our lives if we put our faith and trust in him."

Mr Graham also said his father Billy, who held rallies in stadiums across the UK throughout his preaching career, also faced similar criticism.

Thousands are expected to hear Franklin Graham when he preaches at Blackpool's Winter Gardens between 21st and 23rd September 2018. Offering an invite to his critics, he said: "I'm coming to preach what the Bible says, what God says - I'm not coming with my own message.

Graham described the UK as needing God more than it ever has done and claimed we're living in "dark times".

He did however give reason for optimism and gave this message of encouragement to Christians wanting to bring about change.

"Don't just trust your pastor to do that - you do it!"

Graham's visit comes as many in the UK are questioning the effectiveness of large scale evangelism events.

Last year around 20,000 gathered at Arsenal football club for J.John's Just One event. He had however hoped for double that number of attendees.

Franklin Graham thinks it's wrong to abandon this form of evangelism.

"For many churches they say that's old fashioned, it doesn't work anymore," he told Premier. "They think they've got to have a programme to reach people and a lot of people have lost the urgency of preaching. 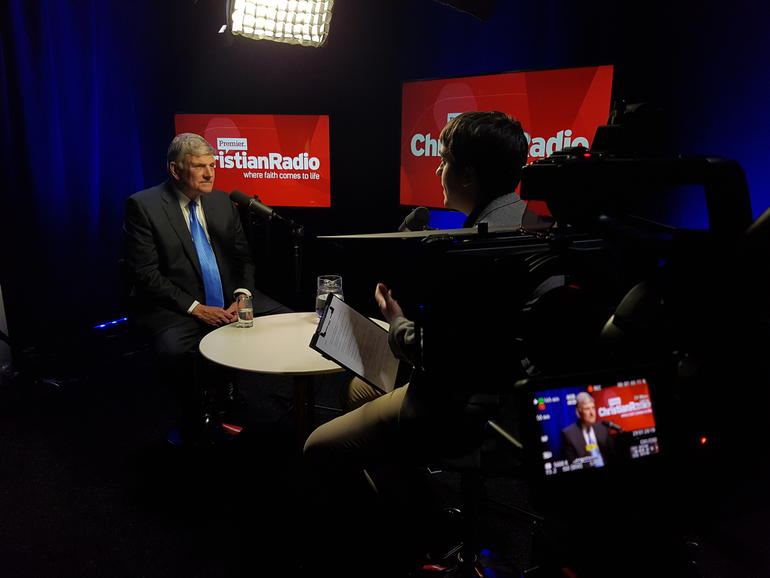 Franklin Graham has also received criticism from within the Church and outside of it here in the UK because of what has been perceived to have been support for US President Donald Trump.

Graham told Premier he wasn't supporting Trump but is simply supporting the president of his country.

"I didn't endorse him but after the election I wanted to get behind the president and try to help him," he said. "If he succeeds it will be good for all Americans.

"There are a lot of things I disagree with - I disagree with the lifestyle he has lived, his past multiple marriages and casinos and all of those things I don't support and don't condone in any way - but he's the President.

"I believe God probably put him there.

"Most presidents have had some past. He needs our prayers - he's not a perfect man and as a Christian I'm going to pray for him."

While Franklin Graham has preached in the UK numerous times before, it's his father Billy who's left a last legacy through his stadium rallies here.

Billy Graham will turn 100 this year.

"His heart is fine, his lungs are fine, he eats well. He's just tired he doesn't say much anymore," Franklin said about his father's health. "He told us at 90 that he'd live to 95 and I didn't believe him. As he approached 95 he moved the goalpost and said he'll live to 100 and I believe him."

"God has left him here on this earth for a reason. I don't know why but God does."