A gay man has received a refund from Uber after being asked to stop kissing his date by the driver who said she was a Christian.

Finn Davies got a cab, provided by the taxi app Uber, on 25th January with another gay man who he had met at a house party.

They were going in a similar direction but were planning on stopping at two destinations to drop each of them off.

Last night, I got an Uber home with a boy and had a smooch in the back, en route. Mid-smooch the @UberUK driver asked us to stop because she was a Christian. That’s not acceptable, right?!

Davies, 32, said they were having pleasant conversation with the Uber driver until they started kissing and she said: "Stop that please, I'm a Christian."

The pair both decided to get off at the first stop in Hackney, saying they felt embarrassed and uncomfortable.

Mr Davies told the website Pink News: "Her tone was stern but calm. We immediately stopped and went silent...I felt guilty that I'd upset the Uber driver.

He said his feelings turned to anger and that he did not want to continue his 20-minute journey alone after the other man was dropped off.

The other man wrote on his phone in a note: "'That was very awkward', and passed it to me so that I could see it."

The driver had a 4.93 rating out of 5 from previous passengers and had been a driver for two years.

Uber has responded saying they will follow up with the driver to ensure it doesn't happen again and that his journey would be refunded.

Mr Davies reacted: "So I received a refund from @UberUK but no apology. Disappointing to say the least." 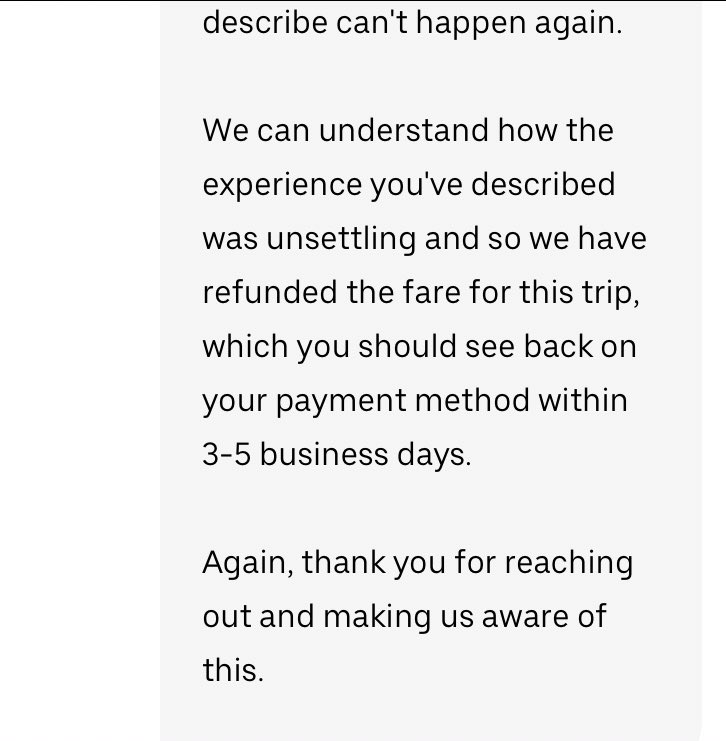 Some commenting on Twitter said if they were the driver they would have understood and felt the same about any couple kissing in their car.

Most commenting said that it was unlikely she would have felt uncomfortable if it were a straight couple and questioned why she cited her religion.

Mr Davies told the Independent: "I wanted to ask her to elaborate but either my British reserve or dislike of confrontation stopped me. I felt very upset that someone would use their religion against me.

"I wondered if she stoned adulterers in the street, ate shellfish or reprimanded people for braiding their hair. You can't pick and choose what you believe in from the Bible. If you are going to take one thing literally you have to take everything literally. Otherwise you are a bigot hiding behind a book."