Billy Vunipola was booed as Saracens suffered a 23-21 defeat at Bristol after he defended Folau's comments about sin, hell and repentance.

England's number eight, Vunipola, 'liked' fellow Christian rugby player Israel Folau's post on Instagram (below) and then wrote a detailed response about why, after receiving three phones calls asking him to 'unlike' the post.

Folau added as his caption: "Those that are living in sin will end up in hell unless you repent. Jesus Christ loves you and is giving you time to turn away from your sin and come to him." 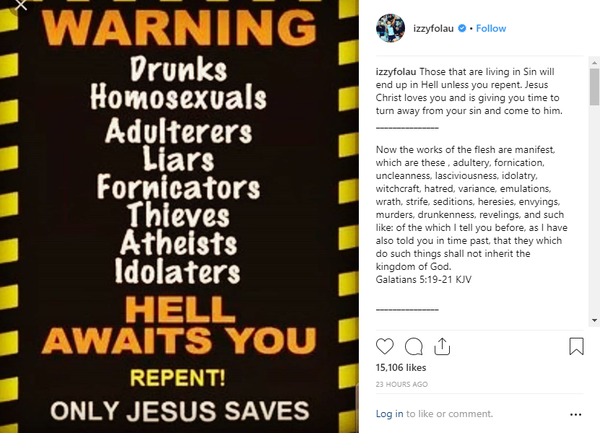 Refusing to unlike the post, Vunipola wrote: "There just comes a point when you insult what I grew up believing in that you just say enough is enough,

"What he's saying isn't that he doesn't like or love those people. He's saying how we live our lives needs to be closer to how God intended them to be.

"Man was made for woman to pro create. That was the goal, no? I'm not perfect. I'm at least everything on that list at least at one point in my life. It hurts to know that. But that's why I believe there's a God. To guide and protect us and forgive us our trespasses as we forgive those who trespass against us."

Since then, the Tongan-born player is to be questioned by the Rugby Football Union and was not given a warm reception by the Ashton Gate crowd.

He was booed every time he touched the ball after entering the game as a replacement after 51 minutes of the game.

Vunipola's Instagram posts are now the subject of a Rugby Football Union investigation and are also being looked into by the club.

Saracens director of rugby Mark McCall said of Vunipola's mindset going into the match: "He is a human being and he is also keen to do well for his team-mates. He is a great club man. I thought he did well when he came on in fairness.

"But he is a human being and I am sure there is stuff going on in his head. The club have made a clear statement and we have not sat down with him yet. I will talk to him myself.

"The decision to play him from the bench was made before what happened, happened."

McCall said of the booing during the game: "I am not sure if it is surprising. It was unexpected. I don't want to get dragged into anything. My opinion is not that relevant."