A new exhibition will honour a Christian missionary who gave her life to help protect Jewish schoolgirls during the Second World War.

Jane Haining's devotion to her pupils led to her death in an extermination camp in Nazi-occupied Poland in 1944.

She was the matron at the Scottish Mission School in Budapest, Hungary, but refused to return home at the outbreak of war, saying the Jewish girls in her care needed her in the "days of darkness".

Her life is now the focus of a display launching on Friday at Wigtown Parish Church in Dumfries and Galloway, which features photographs, documents, letters and other artefacts.

First Minister Nicola Sturgeon said: "It is important to learn from historical events such as the Holocaust and Jane Haining's remarkable and brave story is one from which we can all learn.

"Jane's story and countless others must be remembered and shared in the hope that we will never allow such atrocities to take place again."

Rev Eric Boyle, minister of Wigtown and Kirkcowan Parish Church, said: "Jane Haining was a courageous and compassionate woman whose life was cut short during a dark period of history and it is a privilege and honour to host this exhibition."

The Church of Scotland missionary, from Dunscore near Dumfries, kept the girls safe for nearly five years and was eventually arrested by the Gestapo on eight charges - including working among Jews in her care. 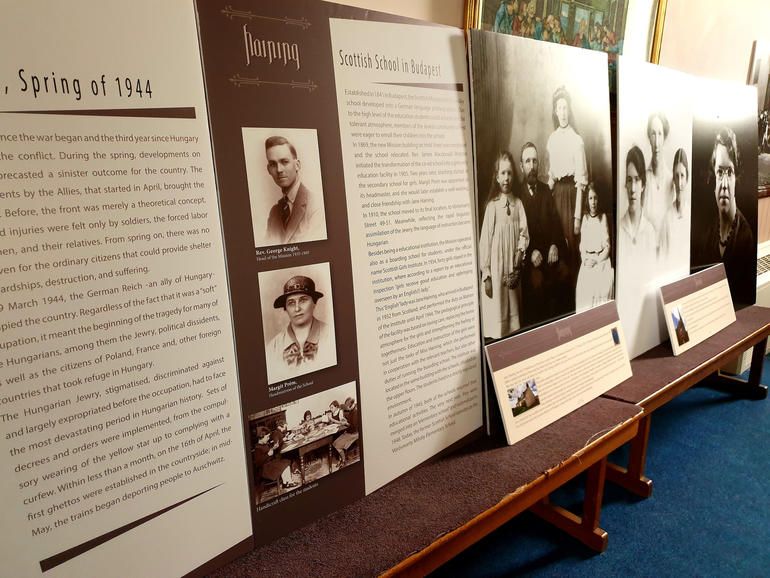 Undated handout photo issued by the Church of Scotland of a new exhibition dedicated to Jane Haining, a Scot who gave her life to help protect Jewish schoolgirls during the Second World War.

She was betrayed by the cook's son-in-law, who she caught stealing food.

Miss Haining was imprisoned in Budapest for several months before being moved to the Auschwitz-Birkenau death camp in May 1944, where she likely died in a gas chamber aged 47.

She is the only Scot to have a place among the Righteous Among the Nations at the Yad Vashem Holocaust memorial in Israel.

The exhibition is on loan from the Holocaust Memorial Centre in Budapest and there are aspirations to put it on display in Edinburgh and Glasgow churches in the future.

Its launch coincides with the Wigtown Book Festival, which opens on Friday .

Mary Miller, author of Jane Haining - a Life of Love and Courage, will read from her book at the church as well as speaking at the festival.

The display is open to the public between 10am and 4pm daily during the festival, which runs until October 6.