The former Archbishop of Canterbury, Lord Carey, has said the UK's fear of criticising Islam has led to a 'de facto blasphemy law'.

Writing in the Sunday Times after the terror attacks in Paris that left 17 people dead he said journalists 'live in fear' of speaking against Muslims.

He urged the media to publish controversial material even if some parts of society would find it offensive. 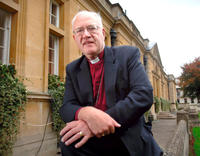 Blasphemy laws were "unjust and outdated," he said, as he urged journalists to ignore what had become an unwritten rule about offending religions.

"We need not worry about taking the vast majority of Muslims with us," he said.

"They are much more offended by violence committed in their name than by cartoons or images of their prophet."

The former archbishop also called on Muslim leaders to make it clear that blasphemy rules do not apply to people of other faiths and none.

Meanwhile huge crowds and more than 40 world leaders are expected in Paris to take part in a rally following the Charlie Hebdo attacks.

Several thousand police officers and soldiers are being deployed across the French capital to protect the marchers.

In London several landmarks will be lit in the colours of the French national flag.