Archbishop of York dances with joy as England beat Sweden

The Archbishop of York danced a jig when Dele Alli scored as the General Synod of the Church of England took time out to watch the England victory, delegates ha

The Church's main legislative body is meeting at York this weekend - with almost 500 delegates attending, including bishops, clergy and lay members.

But they agreed to pause the proceedings on Saturday afternoon for the World Cup quarter-final clash between England and Sweden, with picture posted on social media of delegates watching the match on a huge screen in the chamber, at York University.

One attendee, Mark Russell, posted a picture of the Archbishop of York, John Sentamu, dancing after Alli's second-half goal and said the second most important figure in the Church of England prayed for the team.

Mr Russell said: "The General Synod of the Church of England show the #ENGSWE game in the chamber! As our Archbishop prays for the team! This is awesome!"

Dr Sentamu tweeted through the game, singling out Jordan Henderson, Raheem Sterling and Alli for his praise and encouragement.

At the end of the match, he posted: "Team England. You have done it and we gladly rejoice! Rest well and know that you are in our prayers! Peace to you all!"

Earlier, the archbishop said on Twitter: "TEAM ENGLAND it's your time to shine! Ps play the beautiful game as a TEAM: Together Each Achieves More! Take Risks!"

A vicar delegate joked: "A ripple of gentle applause breaks out in the synod chamber after a good pass. Give it half an hour and there'll be people throwing beer at the screen, holding each other back from fist fights and a new synodical vocabulary." 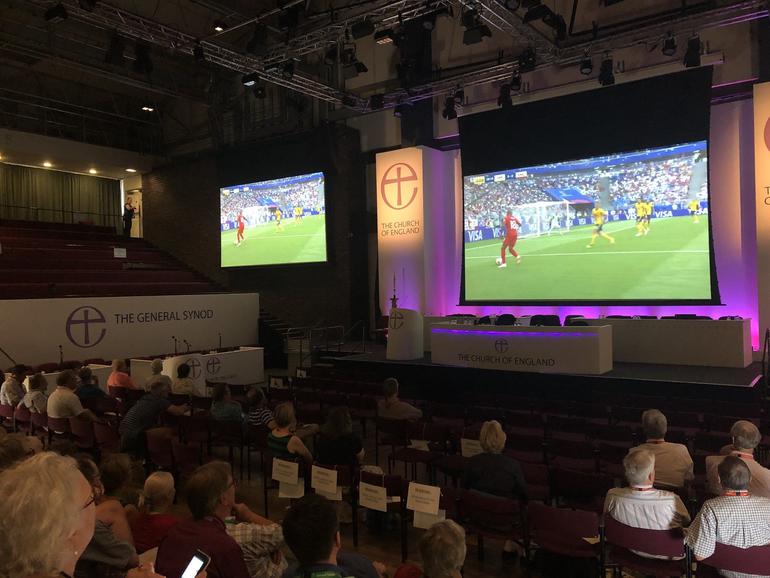 Handout photo taken with permission from the Twitter account of Mark Russell @markrusselluk of delegates to the General Synod of the Church of England watching England play Sweden in the World Cup quarter-final on a huge screen at York University.

Dr Sentamu was always a huge Manchester United fan, but become more and more involved with York City after moving to the city more than a decade ago.

Missionary bishop and broadcaster Gavin Ashenden tweeted from the Synod: "General Synod give up trying to 'do God' and revert to something less ambitious - the nation's real national religion and church - the adoration of football."

Suffolk vicar Andrew Dotchin joked that he had just been given a sneak preview of the liturgy for Evening Prayer at the Synod.

His alternative Lord's Prayer began: "Our Gareth, who art in Samara. Hallowed by thy waistcoat. Thy moment's come, they match will be won, in normal, not in extra time."

It continued: "Give us this day our 2-0 win, and forgive us for doubting your tactics, as we forgive those who dive against us.

"Lead us not into penalty shootouts, but deliver us from Sweden.

"For thine is the semis, the final and the glory, for ever and ever. #ItsComingHome."