Restoration works on Coventry's old cathedral have uncovered the original floor for the first time since the building was destroyed by Nazi bombers in 1940.

St Michael's was a 14th century Gothic church later designated a cathedral, which remains a ruined shell after its bombing during the Second World War.

The excavation is being carried to seal an ancient crypt that's being damaged by water leaking through the floor of the site.

Findings include the burst base of the Rood Screen which would have been destroyed in the fire in 1940.

Archaeologists have also discovered a window space through the Wyley Chapel, that views the earth where a concealed Crypt is believed to have stood.

"We're doing some work to some crypts underneath the old ruins, as they are now, and we've unearthed some fascinating archaeology which ranges from the 1250s to the 1960s," said Christine Doyle, head of development at Coventry Cathedral.

"In 1968 they laid a false floor with flag stones, which is now open to the elements. Those flag stones have come up and we've now found the old original of the medieval cathedral which was made of memorial stones," she added. 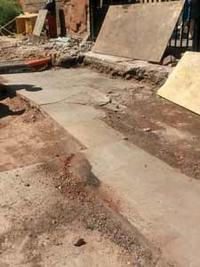 The Dean of Coventry, the Right Reverend John Whitcombe, has said the building's history has been "brought alive" by the discovery.